Contract Builds Upon Strong Supply Relationship Between the Two Companies

Jul. 11, 2016-- Thales , a joint venture between (67%) and (33%), today announced the signing of a new contract with (NYSE:OA) a global leader in aerospace and defense technologies. The announcement was made at the International Airshow in . 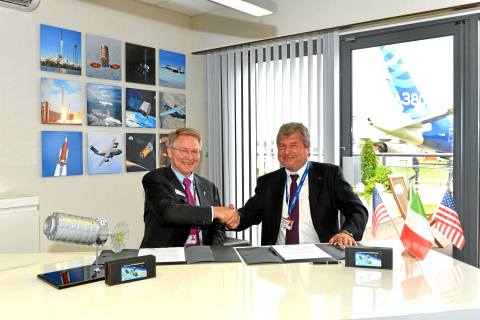 Under terms of the agreement, Thales Alenia Space will supply nine additional Pressurized Cargo Modules (PCM) to for upcoming cargo resupply missions to the (ISS). The cargo module is designed to transport crew supplies and science experiments on Orbital ATK s Cygnus spacecraft under NASA s Commercial Resupply Services contract. Cygnus recently delivered 7,900 pounds of cargo and science experiments to astronauts aboard the station and successfully completed its fifth mission under the contract. is scheduled to complete 10 CRS-1 missions to the before transitioning to launch cargo logistics missions under the CRS-2 contract in 2019.

We are truly proud of the renewed trust that has put in us," said , Vice President, Exploration and Science of Thales Alenia Space. The signing of this latest contract represents the continued vote of confidence from a valued customer in our engineering and our facility that provides pressurized cargo modules to re-supply the . We look forward to continuing this successful relationship for many years to come.

Cugno added, This new contract not only guarantees the continuity of our role as global leaders within the field of space infrastructures but it also underlines the distinctiveness of our know-how and of our skills which we will continue to make available in the organization of future adventures beyond the in order to provide support for space exploration.

Thales Alenia Space has been one of our most reliable and strategic partners in the area of human spaceflight, said , President and Chief Executive Officer of . The pressurized cargo modules developed by Thales Alenia have worked flawlessly to establish Cygnus as a flagship product for cargo resupply missions and as a research platform for science experiments that enable deep space exploration. The enhanced pressurized cargo module flown on our last two missions also enabled Cygnus to carry over 50 percent more cargo to , further demonstrating the versatility and flexibility that Cygnus offers to our customers.

The new configuration incorporates a number of upgrades as compared to the standard PCM utilized prior to this mission. These include a lighter and more efficient solution for storing and constraining the cargo inside the module, allowing for an increase in the mass and volume of cargo amount able to be transported to the orbiting laboratory. In addition, the new design confirmed the ability to accommodate cargo bags with both irregular shape and stiffness. The improved PCM also accommodates an increased number of middeck lockers as compared to the existing module design which enhances the capability to transport science experiments.

Thales , a joint venture between (67%) and (33%), is a key European player in space telecommunications, navigation, Earth observation, exploration and orbital infrastructures. Thales and Telespazio form the two parent companies' Space Alliance , which offers a complete range of services and solutions. Because of its unrivaled expertise in dual (civil/military) missions, constellations, flexible payloads, altimetry, meteorology and high-resolution optical and radar instruments, is the natural partner to countries that want to expand their space program. The company posted consolidated revenues in excess of in 2015, and has 7,500 employees in 8 countries. www.thalesaleniaspace.com