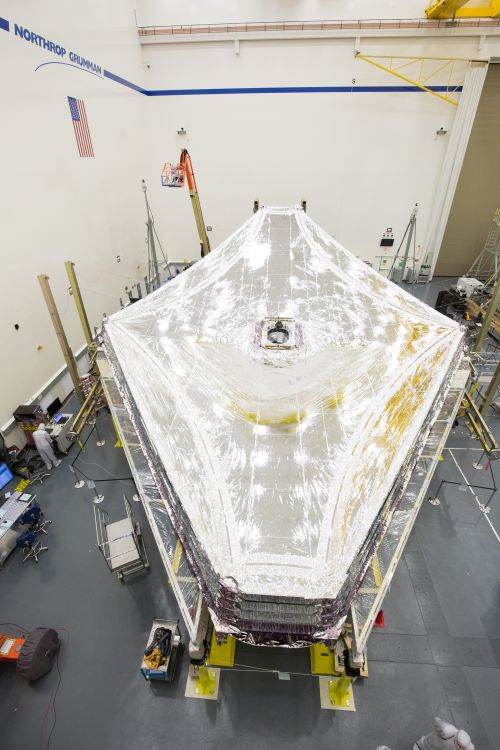 “The first tensioning of the sunshield is a monumental and exciting moment, not only for the program but for the collaborative JWST team,” said Scott Willoughby, vice president and program manager, James Webb Space Telescope, Northrop Grumman Aerospace Systems “The innovative sunshield is an industry first, and will protect Webb’s optics from heat, making it possible to gather images of the formation of the first stars and galaxies more than 13.5 billion years ago.”

In space, the sunshield subsystem divides the JWST observatory into a warm sun-facing side and a cold space-facing side comprised of the optics and scientific instruments. The sunshield subsystem, which includes the structure and mechanisms required for deploying the five-layer subsystem, was designed, manufactured and assembled by Northrop Grumman, with the five membrane layers manufactured by the NeXolve Corporation in Huntsville, Alabama.

The flight membranes will be folded, stowed and tensioned again two additional times for testing. The folding and stowing method is how the membranes will be folded and stowed for launch. The sunshield layers, known for being the size of a tennis court, will protect and prevent the background heat from the Sun, Earth and Moon from interfering with JWST’s infrared sensors.

The sunshield layers, each as thin as a human hair, work together to reduce the temperatures between the hot and cold sides of the observatory by approximately 570 degrees Fahrenheit. Moving from the sun-facing layer to the one closest to the telescope, each successive layer of the sunshield, which is made of Kapton, is cooler than the one below. The sunshield, along with the rest of the spacecraft, will fold origami-style into an Ariane 5 rocket.