“Our flight tests in 2015 and 2016 proved the system could do what was previously thought to be undoable – that IBCS could provide the C2 for sensors and weapon systems never intended to work with each other,” said Dan Verwiel, vice president and general manager, missile defense and protective systems, Northrop Grumman. “The lessons learned from last year’s Limited User Test (LUT) have resulted in a substantially improved system. By all indications, IBCS performed exceedingly well; software deficiencies identified during the past LUT have been resolved.”

“This SCOE is an enterprise-level integration and test of IBCS and Army IAMD assets and capabilities with soldier operators,” said Barry Pike, Program Executive Officer, Missiles and Space, U.S. Army. “The event allows air defense warfighters the unprecedented opportunity to provide relevant system performance and interface feedback when the system is integrated with actual tactical hardware and software.”

Brig. Gen. Randall McIntire, commandant, Army Air Defense Artillery School, and chief, Air Defense Artillery, said, “I am very pleased with the significant progress made on IBCS over the last year. It is going to open up the aperture in terms of how we will be able to fight in the future. What we are working on today will be key for decades to come in our ability to combine offensive and defensive fires into one entity that is fast and agile.”

The SCOE was also a rigorous test for IBCS ease of use since soldiers who have never used the system before received only four weeks of training on the system prior to the start of the event. Even with simultaneous targets reaching hundreds during some of the air battles, the soldiers performed exceptionally well.

“We know we need this capability and we are going to be able to fight with the system. I think we are going to see exponential growth and progress in the future,” said McIntire.

In October, IBCS and Army IAMD will undergo the second phase of the SCOE at Yuma Proving Ground, Arizona, to look at live-air operational performance in a joint environment.

Foundational to IAMD transformation and key to the Army IAMD portfolio, the IBCS is managed by the IAMD Project Office, Program Executive Office for Missiles and Space, Redstone Arsenal, Alabama. 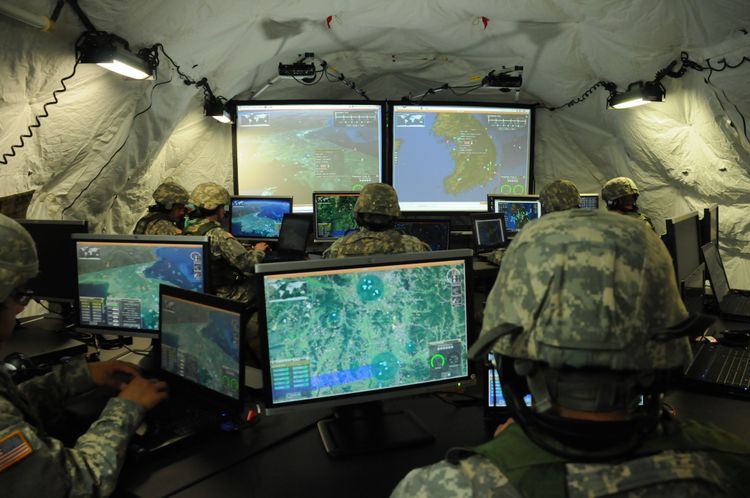