Jul. 12, 2014-- (NYSE: ORB), one of the world s leading space technology companies, today announced it is in final preparations to launch the company s AntaresTM rocket carrying its CygnusTM cargo logistics spacecraft destined for the (ISS). Pending completion of final vehicle testing and acceptable local weather conditions, the launch will take place on with lift-off targeted for . The launch will originate from the Mid-Atlantic Regional Spaceport located at NASA s Wallops Flight Facility in eastern . The Antares medium-class rocket will boost the Cygnus spacecraft into a targeted orbit of 125 x 185 miles (200 x 300 kilometers) above the Earth, inclined at 51.6 degrees to the equator. Following in-orbit activation and testing after launch, Cygnus will rendezvous and berth with the ISS on at approximately . Live coverage of the Antares launch and Cygnus berthing with the ISS will be available on NASA Television at http://www.nasa.gov/ntv. 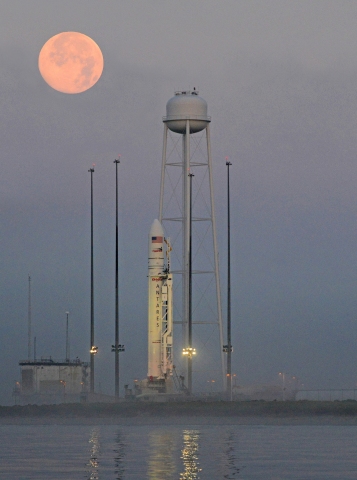 Orbital s Antares rocket on the Mid-Atlantic Regional Spaceport (MARS) Pad 0A at NASA s Wallops Flight Facility, . Antares is set to launch on carrying the Cygnus spacecraft which will deliver 1,664 kg (3,669 lbs) of cargo to the . (Photo: Business Wire)

With the first operational mission successfully completed earlier this year, we are now focused on regularly scheduled cargo delivery flights to the to support and the astronauts who are carrying out vital research every day, said Mr. , Orbital s Chairman and Chief Executive Officer. Our team is focused and ready to execute another successful mission that will deliver necessary supplies to the crew aboard the Station.

For the Orb-2 Commercial Resupply Services (CRS) mission, the Cygnus spacecraft is carrying 3,669 pounds (1,664 kilograms) of supplies to the , including science experiments to expand the research capability of the Expedition 40 crew members aboard the orbiting laboratory, along with crew provisions, spare parts and experiment hardware. Also onboard are 32 CubeSats, hardware for Japan s and numerous student science experiments. This mission, together with future Cygnus flights, will ensure a robust national capability to deliver critical research equipment and samples to orbit, significantly increasing NASA s ability to conduct new scientific investigations in the only laboratory in microgravity.

Under the CRS contract with , Orbital will use Antares and Cygnus to deliver up to 44,000 pounds (20,000 kilograms) of cargo to the ISS over eight missions through late 2016. For each mission, will manifest a variety of essential items based on ISS program needs, including food, clothing, crew supplies, spare parts and equipment, and important scientific experiments.

Orbital developed the Antares launch vehicle to provide low-cost, reliable access to space for medium-class payloads. It is the largest and most complex rocket the company has ever produced. Under the Commercial Orbital Transportation Services (COTS) joint research and development initiative with , Orbital also developed the Cygnus spacecraft, which is an advanced maneuvering vehicle that meets the stringent human-rated safety requirements for ISS operations. Together, these products showcase Orbital s ability to apply rigorous engineering approaches and commercial business practices to significantly shorten development timelines and lower operational costs of sophisticated space systems as compared to traditional government-run programs.

The Antares medium-class launch vehicle represents a major increase in the payload launch capability that Orbital can provide to , the and commercial customers compared to its heritage small-class space launch vehicles such as Pegasus, Taurus and Minotaur. The Antares rocket can launch spacecraft weighing up to 14,000 lbs. (6,400 kg.) into low-Earth orbit, as well as lighter-weight payloads into higher-energy orbits. Orbital s newest launcher has completed three successful missions and is currently on-ramped to both the NASA Launch Services-2 and the U.S. Air Force s Orbital/Suborbital Program-3 contracts, enabling the two largest U.S. government space launch customers to order Antares for right-size and right-price launch services for medium-class spacecraft. For more information on Antares, visit http://www.orbital.com/SpaceLaunch/Antares/.

Orbital developed the Cygnus cargo spacecraft as part of its COTS joint research and development initiative with . Cygnus consists of a common Service Module (SM) and a Pressurized Cargo Module (PCM). The SM incorporates avionics, power and propulsion systems already successfully flown aboard dozens of Orbital s LEOStar and GEOStar satellite products. The PCM, designed and built by Thales Alenia Space under a subcontract from Orbital, is based on the Multi-Purpose Logistics Module (MPLM) used with the Space Shuttle. For more information on Cygnus, visit http://www.orbital.com/NewsInfo/Publications/Cygnus_fact.pdf.

Orbital develops and manufactures small- and medium-class rockets and space systems for commercial, military and civil government customers. The company s primary products are satellites and launch vehicles, including low-Earth orbit, geosynchronous-Earth orbit and planetary exploration spacecraft for communications, remote sensing, scientific and defense missions; human-rated space systems for Earth-orbit, lunar and other missions; ground- and air-launched rockets that deliver satellites into orbit; and missile defense systems that are used as interceptor and target vehicles. Orbital also provides satellite subsystems and space-related technical services to agencies and laboratories. More information about Orbital can be found at http://www.orbital.com. Follow the company on Twitter @OrbitalSciences.