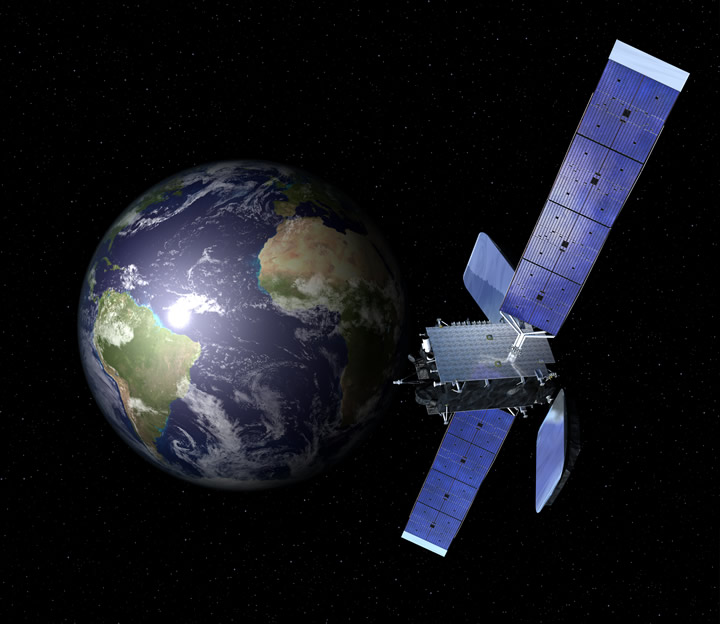 -- Spacecraft to be based on Orbital's GEOStar family of satellite platforms --

-- HISPASAT to strengthen its position in Latin America, a region of growing demand for satellite capacity --

Madrid, June 25, 2012. - Group HISPASAT CEO Carlos Espin s and Executive Vice President Mike Larkin of Orbital Sciences Corporation, today signed a contract in Santander, Spain, for the construction of two new satellites, Amazonas 4A and Amazonas 4B. These satellites will be located at orbital position 61 West longitude to enhance the company's presence in the Americas, where HISPASAT is a leader in the dissemination of content in Spanish and Portuguese.

The Amazonas 4A and 4B satellites will allow HISPASAT to meet the growing demand for satellite capacity, mainly for satellite television platforms, in Latin America. This demand is expected to increase even more due to major sporting events taking place in Brazil in the coming years, including the World Cup 2014 and the 2016 Olympics.

These two satellites, together with the upcoming launch of the Amazon 3, are examples of HISPASAT's strong commitment to the Latin American market. Thus, HISPASAT will strengthen its position in the region, characterized by high growth potential for both video and broadband services, and maintain a significant market share. In 2011, 49.1% of HISPASAT's total capacity leasing income came from the Americas.

The Amazonas 4A and 4B satellites, along with those already provided in its Plan for Growth and Expansion, will double HISPASAT's in-orbit fleet over the next four years. Five satellites are currently in orbit and will soon be joined by the Amazonas 3, the AG1 spacecraft, followed by the two new satellites from Orbital, and the Hispasat 1F. HISPASAT's total investment will exceed one billion Euros and will provide significant returns for Spanish companies in the aerospace sector.

In the words of Chief Executive Officer Carlos Espin s, HISPASAT "is very pleased to have selected Orbital as the manufacturer of next satellites in the Amazonas series. Orbital's GEOStar satellites are suited to our requirements in terms of performance, price development schedule. Their proven ability to deliver on deadlines will help us to meet the growing demand for additional capacity in Latin America."

The Amazonas 4A satellite will carry a payload of 24 Ku-band transponders with coverage of South America, from Venezuela and Colombia in the north, to Argentina and Chile in the south. Satellite performance will be 46 to 48.5 dBW throughout the South American mainland. The launch of Amazonas 4A is scheduled for early 2014. The higher-power Amazonas 4B, whose final design will be determined later depending on market requirements, will be launched into orbit in 2015. Both GEOStar satellites will be designed, manufactured and tested at Orbital's facility in Dulles, Virginia in the United States.

Commenting on the new contract award, Orbital Executive Vice President Mike Larkin, said, "We are delighted to welcome HISPASAT as a new customer for our GEOStar satellite product line. We continue to see excellent adoption of our small- and medium-class satellite platforms by regional operators around the world, with particular strength in Europe, Latin America and South Asia".

Amazonas 4A and 4B are the 34th and 35th geosynchronous-Earth orbit communications satellites ordered by Orbital customers around the world, 26 of which are in orbit with nine others (including the two new Amazonas satellites) in design, production or pre-launch preparations.

About the HISPASAT Group

The HISPASAT Group is composed of companies with a presence in Spain as well as in Latin America, where the Brazilian operator HISPAMAR operates the Amazonas fleet of satellites. The Group is a leader in the broadcast and distribution of content in Spanish and Portuguese, including the content of important Direct-to-Home (DTH) digital television platforms and High Definition Television (HDTV). HISPASAT is one of the main companies in the world by revenue in the satellite sector and the main communications bridge between Europe and America.