Medal is One of NASA s Most Prestigious Agency Honor Awards 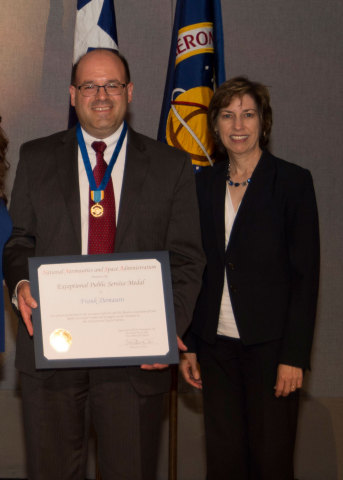 DeMauro was honored for his distinguished aerospace career and flawless execution of two successful Orbital ATK Commercial Resupply Services (CRS) missions to the (ISS). He received the award on at ceremonies honoring recipients of several public service awards at the .

The Exceptional Public Service Medal is one of the highest awards gives to non-government employees, said , President of . This is a terrific honor for that validates his ability to build beneficial relationships with teams and customers, and acknowledges his superb leadership skills.

NASA s ISS Program Office nominated DeMauro for the Exceptional Public Service Medal. To be considered for the honor, candidates must fulfill several criteria that include the following:

I am honored to receive this distinguished award, said DeMauro. I am also humbled at having been nominated by my customer, and accept this award on behalf of my entire team for their dedication to making this program a success. I value the relationship we ve built on this contract, and I look forward to continuing that in the future.

DeMauro has overseen the development, production and delivery of multiple Orbital ATK Cygnus spacecraft and has managed the overall Commercial Orbital Transportation System (COTS) and CRS contracts for the company since 2009. He also manages a multi-unit team and coordinates activity with the Orbital ATK Antares launch vehicle program. Through the COTS and CRS programs in partnership with , and DeMauro have supported the Agency s goal to build a strong commercial space industry with safe, reliable and affordable access to low Earth orbit.