Nov. 14, 2017-- (NYSE: OA), a global leader in aerospace and defense technologies, today announced that the S.S. Gene Cernan CygnusTM spacecraft successfully completed its rendezvous and berthing maneuvers with the earlier this morning. This marks the company s eighth successful berthing with the orbiting laboratory. 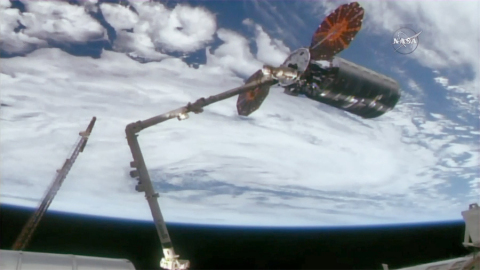 Cygnus launched into orbit aboard an Orbital ATK Antares rocket at NASA s Wallops Flight Facility on . The spacecraft then executed a series of thruster burns over the next couple of days to raise its orbit and reach the space station. Once Cygnus was in close range, crew members grappled the spacecraft with the station s robotic arm at . Cygnus was then guided to its berthing port on the nadir side of the station s Unity module and officially installed to the space station at .

Today s flawless rendezvous and arrival at the signals the start of a busy month for Cygnus as the spacecraft once again demonstrates its capability beyond cargo delivery and removal, said , President of Orbital ATK s . On this mission, the 'S.S. Gene Cernan' Cygnus will act as an extension of the space station for the first time by supporting science experiments inside the cargo module while docked to the laboratory. Cygnus will then begin its secondary mission to deploy a record number of cubesats that will further demonstrate the spacecraft s versatility and flexibility for our customers.

Cygnus arrived at the station with approximately 7,400 pounds (3,350 kilograms) of cargo, supplies and scientific experiments. The crew is now scheduled to open Cygnus hatch and make initial ingress into the cargo module to begin unloading the pressurized cargo. Cygnus will remain docked at the station for approximately three weeks before departing on secondary missions.

During its stay at the orbiting laboratory, after demonstrating its versatility as an in-orbit science platform, the spacecraft will be used as an extension of the space station by hosting experiments that will be conducted inside the Cygnus cargo module while attached to the space station. Cygnus will be unberthed and when a safe distance from the station, a NanoRacks deployer will release 14 Cubesats, a record number for the spacecraft. Upon completion of these secondary missions, Cygnus will perform a safe, destructive reentry into Earth s atmosphere over the .

Under the CRS-1 contract with , will deliver approximately 66,000 pounds (30,000 kilograms) of cargo to the . Beginning in 2019, will carry out a minimum of six initial cargo missions under NASA s follow-on CRS-2 contract. This partnership is cultivating a robust American commercial space industry, freeing to focus on developing the next-generation rocket and spacecraft that will enable humans to conduct deep space exploration missions.

In keeping with Orbital ATK s practice, the OA-8 spacecraft is named in honor of the late space flight pioneer and Apollo 17 Astronaut Capt. . A veteran of one Gemini and two Apollo missions, set records for both lunar surface extravehicular activities and longest time in lunar orbit paving the way for the future of human space exploration.