Mar. 23, 2016-- (NYSE:OA), a global leader in aerospace and defense technologies, successfully launched its CygnusTM spacecraft aboard a (ULA) Atlas V launch vehicle with approximately 7,900 pounds (3,600 kilograms) of cargo and small satellites that will be deployed directly from the spacecraft. The launch marks the beginning of the company s fifth operational cargo resupply mission (OA-6) for , and the first Cygnus to conduct scientific experiments onboard the spacecraft. Cygnus will deliver vital equipment, supplies and experiments to astronauts aboard the (ISS) as part of its Commercial Resupply Services-1 (CRS-1) contract with . 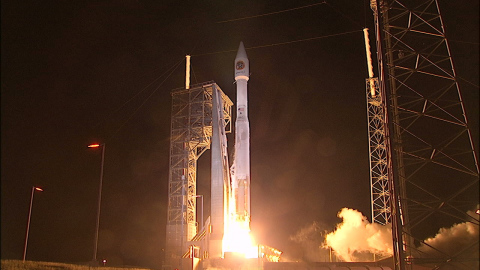 Lift-off of the Atlas V rocket took place at on from , . Following a 21-minute ascent, the S.S. Rick Husband Cygnus spacecraft was successfully deployed into its intended orbit approximately 144 miles above the Earth, inclined at 51.6 degrees to the equator. Orbital ATK s engineering team confirmed that reliable communications have been established and that the vehicle s solar arrays are fully deployed, providing the necessary electrical power to operate the spacecraft.

Today s successful launch continues our great progress and momentum under the CRS contract with NASA, said , President of Orbital ATK s . I applaud the numerous professionals at , ULA and for their hard work and dedication. While we are still early in this mission, everything is tracking well. We now eagerly await Cygnus berthing with the ISS and conducting scientific experiments onboard the spacecraft for the first time.

Cygnus will be grappled at approximately on . The spacecraft will remain attached to the ISS for approximately two months before departing with roughly 4,400 pounds (2,000 kilograms) of disposable cargo for a safe, destructive reentry into Earth s atmosphere over the . Cygnus large-volume and pressurized disposal cargo capability, a critical service to , is unique among America s commercial cargo providers.

Under the CRS contract with , will deliver approximately 59,000 pounds (26,800 kilograms) of cargo to the ISS over 10 missions through 2018. For these missions, will manifest a variety of essential items based on ISS program needs, including food, clothing, crew supplies, spare parts, laboratory equipment and scientific experiments.

The OA-6 mission allows Cygnus to demonstrate its unique flexibility as a spacecraft with capability to launch atop multiple launch vehicles and serve as a platform for science experiments. Once it departs the ISS, Cygnus will enter a specific orbit to deploy five CubeSats, utilizing a NanoRacks CubeSat deployer. Taking place onboard Cygnus, the Spacecraft Fire Experiment-I (Saffire-I) will study the behavior of a large fire in microgravity. The final experiment to take place aboard the S.S. Rick Husband will be the Reentry Breakup Recorder (REBR). The REBR will measure and record Cygnus breakup as it reenters Earth s atmosphere.

The Cygnus system, which consists of a common service module and a pressurized cargo module (PCM), achieves high reliability by incorporating numerous elements from flight-proven spacecraft technologies. The service module is built and tested at Orbital ATK s manufacturing facility. It uses avionics systems from Orbital ATK s LEOStar and GEOStar satellite product lines, plus propulsion and power systems from the company s GEOStar communications satellites. The recently extended PCM, which is based on the Multi-Purpose Logistics Module developed by Thales Alenia Space for , enables Cygnus to carry over 50 percent more cargo than the previous version. The enhanced Cygnus also uses Orbital ATK s UltraFlexTM solar arrays, which are the latest in lightweight, space-qualified, electrical power technology. The arrays were manufactured at Orbital ATK s facility.

has two additional CRS missions scheduled in 2016 to support NASA s ISS cargo and payload mission needs. The company s upgraded Antares launch vehicle remains on schedule for a full-power hot-fire test in late spring. Flight operations for Cygnus and Antares will resume mid-year from NASA s Wallops Flight Facility in eastern . Beginning in 2019, will continue its support of the ISS and its crew by carrying out a minimum of six initial cargo missions under the recently awarded CRS-2 contract.

B-roll and animation footage for the mission can be found at:
http://www.orbitalatk.com/news-room/bmc/#
Please note that media will need to request a PIN for access.