Dec. 6, 2015-- (NYSE:OA), a global leader in aerospace and defense technologies, successfully launched its CygnusTM spacecraft today aboard a (ULA) Atlas V launch vehicle with approximately 7,700 pounds (3,500 kilograms) of cargo for the crew aboard the (ISS), beginning the company s fourth operational cargo resupply mission for . Cygnus will deliver vital equipment, supplies and scientific experiments to the ISS as part of its Commercial Resupply Services (CRS) contract with . 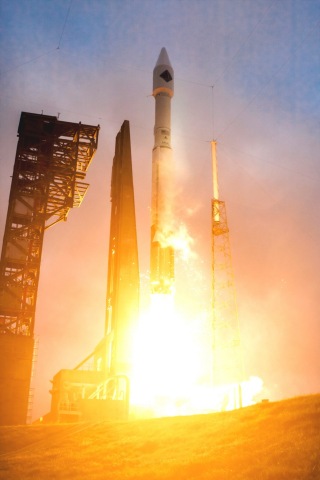 Lift-off of the Atlas V rocket took place at from , . Following a 21-minute ascent, the S.S. Deke Slayton II Cygnus spacecraft was successfully deployed into its intended orbit approximately 144 miles above the Earth, inclined at 51.6 degrees to the equator. Orbital ATK s engineering team confirmed that reliable communications has been established and that the vehicle s solar arrays are fully deployed, providing the necessary electrical power to operate the spacecraft.

This launch marks the completion of the critical first step of our go-forward plan for the CRS-1 contract to meet our commitments to NASA, said , President of Orbital ATK s . Everything looks great in this early stage of the mission. I congratulate the combined , ULA and team for its hard work to get us to this point, and I look forward to completing another safe and successful flight to the ISS in several days.

The Cygnus spacecraft will be grappled at approximately on . Cygnus will remain attached to the station for approximately 50 days before departing with roughly 5,050 pounds (2,300 kilograms) of disposable cargo for a safe, destructive reentry over the .

Like most spacecraft, Cygnus is compatible with multiple launch vehicles. This capability, combined with the flexibility of ULA s Atlas V, enabled to carry out the mission on a shortened schedule to be responsive to NASA s ISS logistics requirements. Another Cygnus mission on an Atlas V will be launched in March, after which Orbital ATK s Antares rocket will launch at least two ISS resupply missions in the second and fourth quarters of 2016.

This launch begins a high tempo of cargo resupply missions supporting the , said Culbertson. With our enhanced Cygnus spacecraft and upgraded Antares rocket, we are prepared to continue delivering vital cargo to the ISS for the foreseeable future.

The enhanced Cygnus spacecraft that launched today incorporated numerous planned upgrades of the vehicle including an extended pressurized cargo module (PCM), which enables the spacecraft to carry over 50 percent more cargo than the previous version. The enhanced Cygnus also uses the latest in lightweight space-qualified electrical power technology with the addition of the company s UltraFlexTM solar arrays which were manufactured at Orbital ATK s facility.

Under the CRS contract with , will deliver approximately 62,000 pounds (28,000 kilograms) of cargo to the ISS over 10 missions through early 2018. For these missions, will manifest a variety of essential items based on ISS program needs, including food, clothing, crew supplies, spare parts, laboratory equipment and scientific experiments. also provides a critical service by providing large-volume pressurized disposal cargo, a unique capability among America s commercial cargo providers.

The Cygnus system, which consists of a common service module and a pressurized cargo module, achieves high reliability by incorporating numerous elements from flight-proven spacecraft technologies. The service module is built and tested at Orbital ATK s manufacturing facility. It uses avionics systems from Orbital ATK s flight-proven LEOStar and GEOStar satellite product lines, plus propulsion and power systems from Orbital ATK s GEOStar communications satellites. The pressurized cargo module is based on the Multi-Purpose Logistics Module developed by Thales Alenia Space for .

In addition, this flight marked the 25th successful flight of the retro motors on the Atlas V, eight of which provided thrust for separation of the spent first stage. The retro motors are built at facility.

Orbital ATK s upgraded Antares launch vehicle remains on schedule for a full-power hot-fire test in early 2016 and resumption of flight operations from the Wallops Flight Facility in eastern in the second quarter of the year.