Dec. 1, 2015-- (NYSE: OA), a global leader in aerospace and defense technologies, today announced it is in final preparations for the company s next CygnusTM spacecraft cargo mission to the (ISS). This mission marks the first launch of a Cygnus spacecraft aboard a (ULA) Atlas V rocket and will be Orbital ATK s fourth operational mission (OA-4) to the ISS for under the Commercial Resupply Services (CRS) contract. The mission also marks the debut of the enhanced Cygnus, which will carry approximately 7,700 pounds (3,500 kilograms) of cargo to astronauts aboard the ISS. 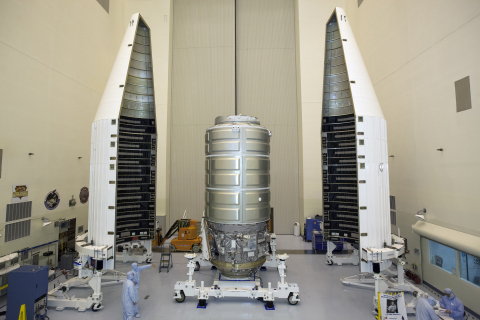 Cygnus spacecraft is prepared for Thursday's launch from . (NASA Photo)

Pending completion of final vehicle testing and acceptable local weather conditions, the launch is scheduled for , at from 41 at in . Cygnus will be launched into a targeted orbit of 143 x 144 miles above the Earth, inclined at 51.64 degrees to the equator. Following in-orbit activation and testing after launch, the spacecraft will rendezvous and berth with the ISS at approximately . Live coverage of the launch and ISS berthing will be available on NASA Television at http://www.nasa.gov/ntv.

has named the OA-4 Cygnus the S.S. Deke Slayton II, upholding the tradition of naming each Cygnus in honor of astronauts and individuals who contributed to the United States commercial space program.

With the naming of this spacecraft, we continue our commitment to honor the late Donald Deke K. Slayton, one of the original Mercury Seven astronauts and a champion of America s commercial space program and leadership in space, said , President of Orbital ATK s . We are pleased that the enhanced Cygnus that bears his name will be able to provide up to 53 percent more in cargo weight to the than our previously flown standard version.

Cygnus, like most spacecraft, is compatible with multiple launch vehicles, enabling the use of ULA s Atlas V launch vehicle on this mission. The enhanced Cygnus has several new features, including lightweight UltraFlexTM solar arrays, a mass optimized Service Module structure and a lighter weight propulsion system. In addition to food, clothing, crew supplies, spare parts and equipment, the Cygnus spacecraft is carrying science experiments to expand the research capability of the Expedition 45 and 46 crew members aboard the orbiting laboratory.

has three CRS missions scheduled in 2016 to support NASA s ISS cargo needs. A second Cygnus/Atlas V launch will take place next spring from , followed by the return of operations to NASA s Wallops Flight Facility in mid-2016 where the company will continue CRS missions atop the upgraded Antares rocket.

Under the CRS contract with , will deliver approximately 62,000 pounds (28,000 kilograms) of cargo to the ISS over 10 missions through 2018. The partnership is changing the way does business, helping build a strong American commercial space industry and freeing the agency to focus on developing the next-generation rocket and spacecraft that will enable humans to travel farther in space than ever before.

is a global leader in aerospace and defense technologies. The company designs, builds and delivers space, defense and aviation systems for customers around the world, both as a prime contractor and merchant supplier. Its main products include launch vehicles and related propulsion systems; missile products, subsystems and defense electronics; precision weapons, armament systems and ammunition; satellites and associated space components and services; and advanced aerospace structures. Headquartered in , employs approximately 12,000 people in 20 states across the U.S. and in several international locations. For more information, visit www.orbitalatk.com.