Sep. 23, 2015-- (NYSE: OA), a global leader in aerospace and defense technologies, and the successfully launched and scored a hit against the Mobile Ship Target during Block 1 upgrade test firings of the AGM-88E Advanced Anti-Radiation Guided Missile (AARGM) at the on . 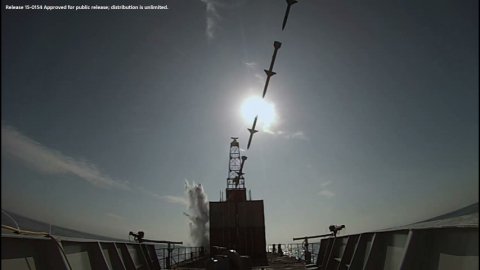 The block upgrade testing demonstrated that the hardware, software and aircraft systems all worked together resulting in the successful live fire of the weapon, said , Vice President and General Manager of Orbital ATK s Defense Electronic Systems division of the Defense System s Group. We look forward to rolling out these upgrades throughout the fleet, upon the successful completion of follow-on operational testing.

This first Block 1 live fire test demonstrated the weapon s effectiveness against a moving ship, said , Vice President Strike Weapons. This is the first live-fire test in a series of live-fire and captive-carry events that will assess the missile s software modifications made to deliver new capabilities to the warfighter.

AARGM is currently deployed with the and . AARGM achieved Initial Operational Capability in and was approved by the for Full Rate Production in .

AARGM is a and Italian Air Force international cooperative major acquisition program with the as the executive agent. AARGM is currently deployed and supporting operational requirements for the and . The missile is integrated into the weapons system on the F/A-18C/D Hornet, FA-18E/F Super Hornet and E/A-18G Growler aircraft. AARGM is anticipated to achieve Initial Operational Capability on the Italian Air Force s Tornado ECR aircraft in 2017.