Antares Rocket Launched 7,400 Pounds of to the Station

Cygnus Scheduled to Berth with on 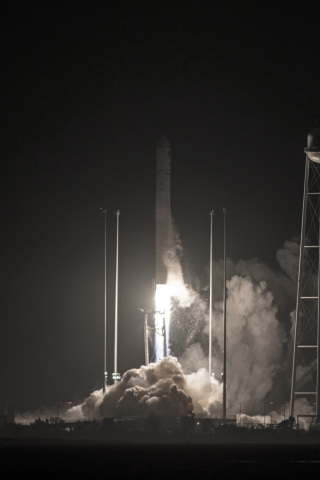 Antares rocket launched the Company's Cygnus spacecraft carrying about 7,400 pounds of cargo for the on . (Photo: Business Wire)

The Antares medium-class rocket matched its record for the heaviest cargo load carried to date with approximately 7,400 pounds (3,350 kilograms) of vital supplies and scientific equipment aboard Cygnus that will be delivered to the crew aboard the .

Following an approximate nine-minute ascent, the S.S. J.R. Thompson Cygnus spacecraft, named in honor of , a distinguished leader in the space industry, was successfully deployed into orbit. Orbital ATK s engineering team confirmed reliable communications have been established and the vehicle s solar arrays are fully deployed, providing the necessary electrical power to operate the spacecraft.

Watching an Antares launch cargo to the is always impressive, said , President of Orbital ATK s . The team works very hard to ensure each commercial resupply mission is successful.

Cygnus will be grappled at approximately on . The spacecraft will remain attached to the space station for approximately seven weeks before departing with up to 7,100 pounds (approximately 3,200 kilograms) of disposal cargo. Cygnus s large-volume disposal capability is unique among America s commercial cargo providers and a critical service for .

On this mission, Cygnus will also fly for the first time with an upgraded communications system known as Common Communication for Visiting Vehicles (C2V2). This new system provides Cygnus with the capability for enhanced communication with science payloads and improved interface with hosted payloads on future missions.

Orbital ATK is proud to once again support the crew on the by delivering valuable supplies, equipment and science, said , President of Orbital ATK s . The upgraded avionics and communication system on the spacecraft demonstrate our commitment to increasing the flexibility and versatility of Cygnus to carry a wide range of payloads. We are also honored to name this mission after , a pioneer in the space industry and someone who many of us here at and in the community were honored to call a colleague and friend.

Once the S.S. J.R. Thompson unberths from the space station, a NanoRacks deployer will release six cubesats. Upon completion of its secondary missions, Cygnus will perform a safe, destructive reentry into Earth s atmosphere over the .

Under the CRS-1 contract with , will deliver approximately 66,000 pounds (30,000 kilograms) of cargo to the space station. Beginning in 2019, the company will carry out a minimum of six cargo missions under NASA s CRS-2 contract. This partnership is cultivating a robust American commercial space industry, freeing to focus on developing the next-generation rocket and spacecraft that will enable humans to conduct deep space exploration missions.

The Cygnus system consists of a common service module and pressurized cargo module (PCM). builds and tests the service module at its manufacturing facility in . The company manufactures several other Cygnus components at three facilities in : UltraFlexTM solar arrays in , composite structures in and propellant tanks in Commerce. The PCM is provided by industry partner Thales Alenia Space in .

B-roll and animation footage for the mission can be found here: http://www.orbitalatk.com/news-room/bmc/#. Please note that media will need to request a PIN for access.