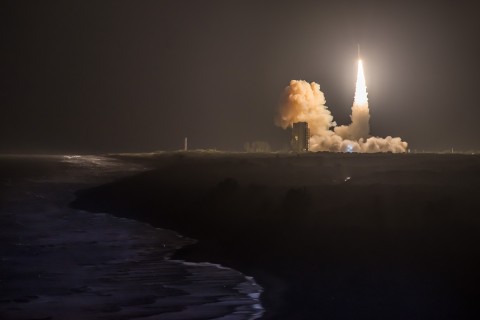 The rocket s first stage ignited at . Approximately 28 minutes later, the Minotaur IV deployed the ORS-5 satellite into its targeted low inclination orbit 372 miles (599 kilometers) above the earth. From this orbit, ORS-5 will deliver timely, reliable and accurate space situational awareness information to the United States Strategic Command through the .

This was our first Minotaur launch from , demonstrating the rocket s capability to launch from all four major U.S. spaceports, said , Vice President and General Manager of Orbital ATK s Launch Vehicles Division. With a perfect track record of 26 successful launches, the Minotaur family has proven to be a valuable and reliable asset for the .

The Minotaur family of launch vehicles is based on government-furnished Peacekeeper and Minuteman rocket motors that has upgraded and integrated with modern avionics and other subsystems to produce an affordable launcher based on flight-proven hardware. Minotaur rockets have now launched from ranges in , , and . The vehicles are procured under the OSP-3 contract administered by .

Orbital ATK has launched nearly 100 space launch and strategic rockets for the U.S. Air Force, said , President of Orbital ATK s . We re proud to be a partner they can count on.

The ORS-5 launch was the sixth Minotaur IV flight. The Minotaur IV is capable of launching payloads up to 4,000 lbs. (or 1,800 kg.) to low-Earth orbit. This mission s Minotaur IV configuration included three decommissioned Peacekeeper stages, an Orion 38 solid-fuel upper stage and an additional Orion 38 insertion stage for the payload. The Minotaur rockets are manufactured at Orbital ATK s facilities in ; Vandenberg, ; and and .

The ORS-5 team is led by the Space and Missile Systems Center s Operationally Responsive Space Office, located at , . in , is the ORS-5 prime contractor. The 50th Space Wing at Schriever AFB, , operates the ORS-5 system.