May 20, 2018-- (NYSE: OA), a global leader in aerospace and defense technologies, today announced it is set to launch the company s AntaresTM rocket carrying its CygnusTM cargo spacecraft to the for . Pending completion of final vehicle testing and acceptable local weather conditions, the launch will take place with lift-off scheduled for from the Mid-Atlantic Regional Spaceport Pad 0A on , at NASA s Wallops Flight Facility. 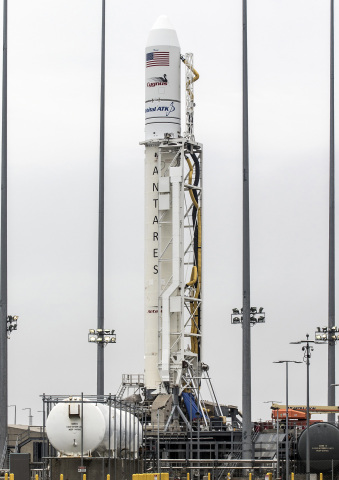 The mission, designated OA-9, will be Orbital ATK s ninth cargo delivery mission for . The Antares medium-class rocket will match its record for the heaviest cargo load carried to date with approximately 7,400 pounds (3,350 kilograms) of vital supplies and scientific equipment that will support the crew aboard the . The Cygnus spacecraft is scheduled to rendezvous and berth with the station on . This mission marks the first flight for Cygnus s upgraded communications system, known as Common Communication for Visiting Vehicles (C2V2), which provides the opportunity for enhanced communication with science payloads and an improved interface with hosted payloads on future missions.

names each Cygnus spacecraft in honor of astronauts and individuals who contributed to the United States commercial space program. The OA-9 mission honors , a distinguished leader in the aerospace industry. Thompson helped shape the strategy and directed the operations of predecessor company, , for nearly 25 years. Before joining Orbital, Thompson was Deputy Administrator in , from 1989 to 1991, following a three-year period as Director of Marshall Space Flight Center in .

Upon arrival at the space station, the S.S. J.R. Thompson will be unloaded and prepped for the next phase of its mission. Cygnus will remain docked for approximately seven weeks to allow the astronauts aboard the space station to repack the module with items that are no longer needed on the orbiting laboratory. The removal of these objects is a crucial step in keeping the operational. Once Cygnus is unberthed, a NanoRacks deployer will deploy six cubesats. Upon completion of its secondary missions, Cygnus will perform a safe, destructive reentry into Earth s atmosphere over the .

Beginning in 2019, will carry out a minimum of six initial cargo missions under NASA s CRS-2 contract. The commercial resupply partnership with is enhancing a robust American commercial space industry, freeing to focus on developing the next-generation rocket and spacecraft that will enable humans to conduct deep space exploration missions.

Live coverage of the Antares launch and Cygnus berthing with the station will be available on NASA Television at http://www.nasa.gov/live. Details about the mission can be viewed at https://www.orbitalatk.com/news-room/feature-stories/OA9-Mission-Page/default.aspx