Nov. 10, 2017-- (NYSE: OA), a global leader in aerospace and defense technologies, today announced it is set to launch the company s AntaresTM rocket carrying its CygnusTM cargo spacecraft to the . Pending completion of final vehicle testing and acceptable local weather conditions, the launch will take place with lift-off scheduled for from the Mid-Atlantic Regional Spaceport Pad 0A on , at NASA s Wallops Flight Facility. 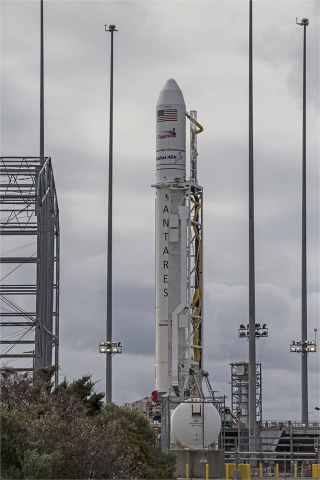 Antares rocket and Cygnus spacecraft are set to launch the company's eighth cargo delivery mission to the . (Photo: Business Wire)

The mission, designated OA-8, will be Orbital ATK s eighth cargo delivery mission for . The Antares medium-class rocket will carry its heaviest cargo load to date, approximately 7,400 pounds (3,350 kilograms) of vital supplies and scientific equipment that will support the crew aboard the . The Cygnus spacecraft is scheduled to rendezvous and berth with the station on .

names each Cygnus spacecraft in honor of astronauts and individuals who contributed to the United States commercial space program. The OA-8 mission honors former astronaut , who passed away last January. Cernan, a veteran of one Gemini and two Apollo missions, set records for both lunar surface extravehicular activities and longest time in lunar orbit, paving the way for the future of human space exploration.

Upon arrival at the space station, the S.S. Gene Cernan Cygnus will be unloaded and utilized for the first time as an extension of the orbiting laboratory for an experiment featuring the SpaceTango facility, TangoLab. TangoLab is a reconfigurable general research facility designed for microgravity research and development. This exercise will demonstrate the ability to expand the station s capabilities for hosting experiments using the Cygnus Module.

Cygnus will remain docked for approximately one month to allow the astronauts aboard the space station to perform the transfer of the lab to Cygnus and then back to the station where it will remain. Once Cygnus is unberthed, a NanoRacks deployer will release 14 Cubesats, a record number for the spacecraft. Upon completion of its secondary missions, Cygnus will perform a safe, destructive reentry into Earth s atmosphere over the .

Among the cargo is a student experiment sponsored by in a partnership with Higher Orbits, a -based non-profit, and its Go For Launch! program. The high school team known as the Saguaro Snakes from the Go For Launch! event in , captured first place for an innovative science experiment that studies the growth of peanut plants in space.

Under the CRS-1 contract with , will deliver approximately 66,000 pounds (30,000 kilograms) of cargo to the . Beginning in 2019, will carry out a minimum of six initial cargo missions under NASA s CRS-2 contract. The partnership is cultivating a robust American commercial space industry, freeing to focus on developing the next-generation rocket and spacecraft that will enable humans to conduct deep space exploration missions.

Live coverage of the Antares launch and Cygnus berthing with the station will be available on NASA Television at http://www.nasa.gov/ntv. Details about the mission can be viewed at http://www.orbitalatk.com/news-room/feature-stories/OA8-Mission-Page.