Dec. 8, 2016-- (NYSE:OA), a global leader in aerospace and defense technologies, provided propulsion, composite and spacecraft technologies to enable the successful launch of both the (ULA) Delta IV rocket and the eighth Wideband Global SATCOM (WGS-8) satellite that was launched yesterday from , . 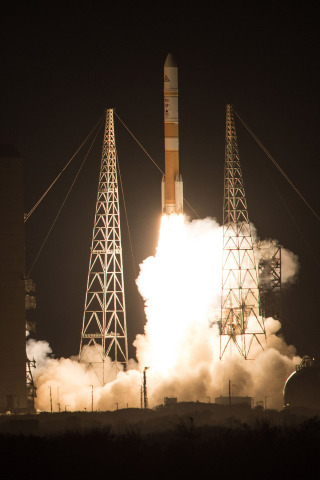 Orbital ATK s propulsion and composite structures on the Delta IV performed very well, and soon the company s space components on the WGS-8 satellite will have the opportunity to do their jobs as well, said , President of Orbital ATK s . A launch like this one clearly demonstrates the breadth of our product lines in the launch and satellite sectors.

Both the satellite and Delta IV launch vehicle use cutting-edge technologies from multiple facilities. For the WGS-8 satellite, produced both loop heat pipes and standard heat pipes, which provide payload, spacecraft bus and battery thermal management, at its , facility. Additionally, manufactured the payload pallet boom tubes at its , location and the payload module at its , site.

For the Delta IV rocket, provided four 60-inch diameter (GEM-60). The 53-foot-long solid rocket boosters burned for 90 seconds and provided more than 1.1 million pounds of thrust, or the equivalent of 17 wide body 747 jet engines running at full throttle. produced the solid rocket motors at its , facility, where it has manufactured 82 GEM-60s in support of the 34 Delta IV launches since the initial flight in 2002.

In addition to the GEM-60 propulsion, supplied a combined thirteen Delta IV and GEM-60 key composite structures, which provide lower weight and higher performance. The largest composite structures are four to five meters in diameter, range from one to fourteen meters in length, and are produced using either advanced wet winding or hand layup, machining and inspection techniques at Orbital ATK s manufacturing facilities in , and .

also manufactured the propellant tank for the Delta IV upper stage roll control system at the company s facility, and it designed and manufactured the nozzles for Delta IV's RS-68A liquid engine and GEM-60 solid motors at its , facility. also designed and produced the nozzle's thermal protection material, which is capable of shielding the nozzle from the extreme heat of launch, when external temperatures can exceed 4,000 degrees Fahrenheit.