Over 150 Domestic and International Customers and Partners In Attendance

Feb. 9, 2017-- (NYSE: OA), a global leader in aerospace and defense technologies, recently wrapped up its second , hosting more than 150 U.S. and international customers and industry partners representing about 25 countries. The highlight of the three-day event was a series of the live-fire product demonstration, including the company s first products resulting from its advanced ammunition R&D program. 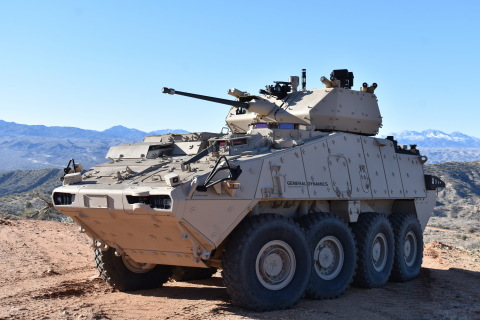 The MK44 Bushmaster Chain Gun was demonstrated in both 30mm and 40mm configurations during the live fire event. Integrated on to the General Dynamics Land Systems LAV with Kongsberg s MCT-30 remote turret, the system replicated the upgrade the companies are providing for the U.S. Army s Stryker Lethality Upgrade program. The MK44 also demonstrated its programmable airbursting munition in both 30mm and 40mm during the demonstration. (Photo: Business Wire)

Customers gathered at in northwest to observe a variety of the company s Bushmaster Chain Guns and automatic cannons firing ammunition ranging from 7.62mm, 25mm and 30mm to the company s newly-developed advanced 40mm family. The event demonstrated the effectiveness of the gun systems and related ammunition in defeating a wide range of battlefield threats through the engagement of a diverse target set including light armor, reinforced concrete structures, trench systems, and brick and mortar walls found in today s operational environment.

showcased the early results of its multi-step growth initiative to develop advanced high-precision medium-caliber ammunition. Customers in attendance witnessed the first public demonstration of the reliability and effectiveness of the company s MK44 chain gun engaging an array of defilade targets with its new 40mm air-bursting ammunition. The next steps in Orbital ATK s advanced ammunition initiative, to be developed over the next two years, will include the introduction of proximity fuzing and precision command guidance into medium-caliber rounds.

This key event brings customers and products together in a live-fire demonstration to showcase the effectiveness, reliability and safety of Orbital ATK s Bushmaster Chain Gun line and ammunition suite, said , Vice President and General Manager of the Armament Systems Division of the . This yearly event has been very successful in terms of attendance, integration of industry partner vehicles and weapons stations, and the ability to showcase our new products.

During this year s live-fire demonstration, publicly demonstrated for the first time its common fuze approach. The development of a standard ammunition fuze creates commonality across multiple round types and offers greater reliability and economies of scale in production that are beneficial to our customers.

The advanced capabilities displayed during the live fire demonstration will appear on upcoming episodes of GunnyTime with R. Lee Ermey beginning summer of 2017 on .