Nov. 30, 2017-- (NYSE: OA), a global leader in aerospace and defense technologies, today announced that the Al Yah 3 satellite has arrived at its launch site in Kourou, , for its upcoming launch on an rocket in . Al Yah 3, built for Al Yah Satellite Communications Company PrJSC (Yahsat), a leading global satellite operator, is the first hybrid electric propulsion GEOStar-3 satellite to be completed by . The satellite was built at the company s satellite manufacturing facility in , and shipped to the launch site on . Al Yah 3 will extend Yahsat s commercial Ka-band coverage to an additional 600 million users across and . 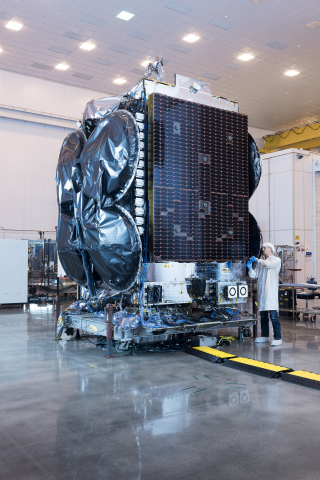 The Al Yah 3 satellite is scheduled for launch in January, 2018. (Photo: Business Wire)

Al Yah 3 is an all Ka-band high-throughput and light-weight satellite that sets a new standard for affordability and payload flexibility in its class. The spacecraft will provide affordable broadband communications to 60% of Africa s population and more than 95% of Brazil s population.

Today s delivery highlights the teamwork and cooperation between and Yahsat that brings us one step closer to advancing our customer s goals, said , Vice President of the Commercial Satellite Business at . With the satellite now in Kourou, we look forward to working with both Yahsat and to prepare for a successful launch in January.

Al Yah 3 is a significant milestone in realizing our vision at Yahsat. Extending our affordable broadband services to 60% of the people in and more than 95% in to bridge the digital divide and enable a more connected world is core to our strategy. We look forward to the successful launch of Al Yah 3 and thereafter furthering our ambitions via future missions to support more growth for YahClick, and for our other business lines such as commercial in-flight connectivity, said , Chief Technology Officer at Yahsat.

The GEOStar-3 platform is the newest, highest power and most advanced platform in the flight-proven GEOStar product line. The spacecraft bus features an increase in both battery capacity and solar array power, enabling the GEOStar-3 to provide up to 8 kilowatts of power to the payload. The hybrid electric propulsion system provides the benefits of higher power and greater payload capability while maintaining cost-effective launches and a faster path to orbit than all electric systems.

Yahsat is a leading global satellite operator, providing multipurpose satellite solutions for broadband, broadcast, government and communications use across the , , , and Central and . Headquartered in , , and wholly owned by , the investment vehicle of the Government of , Yahsat is the first company in the and to offer Ka-band services including YahClick, Yahsat Government Solutions, YahLink and Yahlive via its Al Yah 1 and Al Yah 2 satellites. With the launch of Al Yah 3, Yahsat s commercial Ka-band coverage will be extended to an additional 20 markets, reaching 60% of Africa s population and over 95% of Brazil s population. For more information, visit www.yahsat.ae.