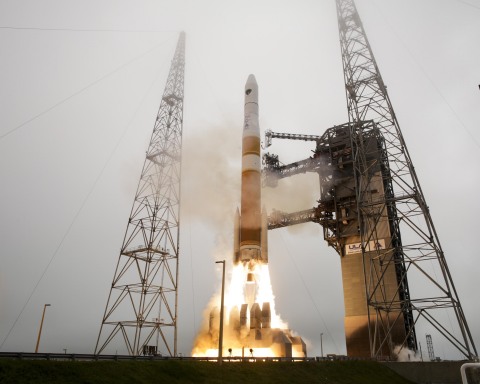 Orbital ATK s contributions to the Delta IV and GPS IIF that launched include cutting-edge technologies from across the company. Photo courtesy of ULA.

Orbital ATK s contributions to the Delta IV and GPS IIF include cutting-edge technologies from across the company. In addition to the state-of-the art solar arrays and other critical components on the GPS IIF satellite, contributions include the two -60 (GEM-60), large composite structures and the main engine nozzle.

Orbital ATK s contributions to the Delta IV GPS IIF-9 mission are prime examples of the affordable, innovative and reliable products we offer, said , President of Orbital ATK s . These products are crucial to our nation and millions of GPS users around the world.

ULA s Delta family of launch vehicles has been lifting high-priority government and commercial payloads to orbit for more than 50 years. This launch marks the 371st Delta rocket since 1960 and the 29th Delta IV since 2002. It also marks the 69th GPS satellite launch and the 55th to use a Delta rocket.

The Delta IV medium-plus rocket flew in a configuration featuring two commercial GEM-60 solid rocket motors produced in . These motors boast a flawless record and are the 43rd and 44th GEM-60s to fly. Their 90 seconds of flight time and 560,000 pounds of thrust boosted the 371st Delta vehicle into the sky.

The nozzle for the launch vehicle s RS-68 engine was designed and manufactured at Orbital ATK s facility in . The nozzle design includes an -developed thermal protection material that is capable of shielding the nozzle from the extreme heat of launch when external temperatures can exceed 4,000 degrees Fahrenheit.

The Delta IV composite structures manufactured by provide higher performance with lower weight and include:

For the GPS IIF-9 satellite, provided a host of products and services:

ULA will deliver two more GPS IIF satellites into orbit this year, and then another in early 2016 to complete the IIF series. These satellites will be delivered into medium-Earth orbits and will circle the globe every 12 hours, providing critical Navstar positioning, velocity, and timing assets fully functional until the next-generation GPS Block IIIA comes online in 2016. In addition to their civilian usage, the Block IIF satellites boast enhanced accuracy, reprogrammable processors, interference-free signals for commercial aviation, search and rescue capability, and a new Military code that is better resistant to electronic jamming.