May 31, 2016-- (NYSE: OA), a global leader in aerospace and defense technologies, today announced it conducted a full-power "hot fire" test of the upgraded first stage propulsion system of its Antares medium-class rocket using new RD-181 main engines. The 30-second test took place at on at Virginia Space s Mid-Atlantic Regional Spaceport (MARS) Pad 0A. Initial indications are that the test was fully successful. The Antares engineering team will review test data over the next several days to confirm that all test parameters were met. Assuming the success of the test is confirmed, it will clear the way for the resumption of Orbital ATK s cargo logistics missions to the (ISS) from , currently scheduled for July. 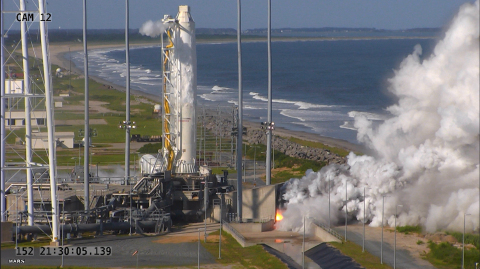 Early indications show the upgraded propulsion system, core stage and launch complex all worked together as planned, said , Orbital ATK General Manager and Vice President, Antares Program. Congratulations to the combined , and team on what appears to be a successful test.

The primary goal of the test was to verify the functionality of the integrated first stage, including new engines, modified Stage 1 core, avionics, thrust vector control and pad fueling systems in an operational environment.

During the test, a number of operational milestones were met including full propellant loading sequence, launch countdown and engine ignition and shut down commands, as well as multiple throttle settings including full engine power. The test also validated the launch pad s operation, including propellant tanking and the use of the water deluge system to protect the pad from damage and for noise suppression.

will now purge and clean the engines of residual propellants and return the first stage used in this test to the Horizontal Integration Facility for full reconditioning prior to its use on the OA-7 mission slated for later this year. The team will continue to prepare the Antares rocket that will launch the OA-5 mission, which is in the final stages of integration, systems testing and check-out in preparation for launch this summer.

Each of the new flight RD-181 engines has undergone hot fire acceptance testing at the manufacturer s facility prior to being shipped to . A certification test series was successfully completed in the spring of 2015 where a single engine was test fired seven times, accumulating 1,650 seconds of test time and replicating the Antares flight profile, before being disassembled for inspection.

The successful stage test, along with the extensive testing of each new RD-181, gives us further confidence in the first stage propulsion and in moving forward to launch, said Pinkston. We are now focused on the OA-5 mission and launching the enhanced Cygnus spacecraft to the on our upgraded, higher-performing Antares rocket.

The enhanced Cygnus recently flew on the successful OA-4 and OA-6 missions, launched in December and March, respectively. The spacecraft has several new features, including larger cargo capacity, the use of Orbital ATK s lightweight UltraFlexTM solar arrays, a mass optimized service module structure and a lighter weight propulsion system. Cygnus, like most spacecraft, is compatible with multiple launch vehicles, enabling the recent use of United Launch Alliance s Atlas V launch vehicle. The OA-5 mission will be the first Antares mission to launch the enhanced Cygnus.

has successfully completed five cargo delivery missions to the ISS, including a demonstration mission in 2013 and four operational missions under the CRS-1 contract from 2014 to present. In total, the company has delivered 24,000 pounds (10,900 kilograms) of essential equipment and supplies in support of ISS crew and operations.

Under the CRS contract with , will deliver approximately 62,000 pounds (28,000 kilograms) of cargo to the ISS over 11 missions through 2018. The partnership is changing the way does business, helping build a strong American commercial space industry and freeing the agency to focus on developing the next-generation rocket and spacecraft that will enable humans to travel farther in space than ever before. is also on contract for six initial missions for the follow-on CRS-2 program.