Feb. 24, 2015-- (NYSE: OA), a global leader in aerospace and defense technologies, performed a live-fire demonstration of a key element of its Helicopter Active Protection System (HAPS). The HAPS Kill Vehicle (KV) was able to launch, perform pitch maneuvers and fly to a detonation point that simulated the location of an incoming rocket-propelled grenade (RPG). The demonstration is a valuable step toward a solution for the RPG threat to helicopters flying missions in dangerous areas. 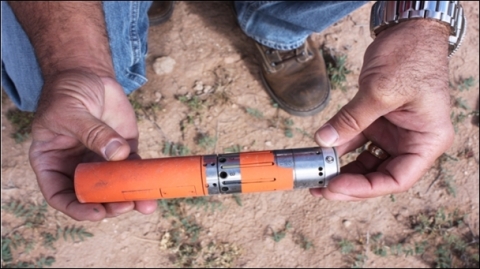 Helicopters are vulnerable to damage from RPGs because the aircraft often hovers in position at low altitude, making it easy to target by an enemy on the ground. HAPS is designed to identify an incoming threat, launch and guide a KV to a precise location and detonate a warhead at a point where the RPG is rendered ineffective. All of this is designed to occur within a fraction of a second and far enough away from the helicopter to ensure the crew and aircraft are not harmed by metal fragments from the destroyed RPG.

The live-fire demonstration was designed to prove-out launch from a fixed ALE-47 Countermeasures Dispense System, off-axis pitch maneuvers of the KV and controlled flight of the KV to an impact point. The test flights successfully demonstrated these attributes and validated a number of HAPS components, including the KV launch cartridge, KV divert and attitude thrusters, non-linear guidance and control algorithms, and the fast-sync wireless command guidance link.

Orbital ATK is dedicated to working with our customers to further develop this first-of-a-kind active protection system for helicopters and put it into the hands of our armed forces, said , vice president and general manager of Orbital ATK s Defense Electronic Systems division of the . Our design uses the helicopter s existing, fixed Countermeasures Dispense System to launch the kill vehicle, allowing HAPS to meet the performance goals and the size, weight and power constraints.

Our aircraft protection systems demonstrate a commitment to protecting the warfighter, said , executive vice president and president, . We took an innovative approach to meet operational needs that can make a real difference in the level of safety for helicopters and their crews.

The HAPS system consists of an Engagement Management Module, a slightly-modified Counter Measures Dispense System, such as the ALE-47, and the KVs that launch from the counter-measures dispenser. The KVs fit within the envelope of the standard flare and chaff launch tubes. In addition to countering RPGs, HAPS can serve as a last line of defense against advanced man-portable air-defense systems, or MANPADS.

The live-fire test was conducted in , and witnessed by personnel from the . The Technology Office sponsored the testing of Orbital ATK s internally-developed active countermeasure.

is a global leader in aerospace and defense technologies. The company designs, builds and delivers space, defense and aviation systems for customers around the world, both as a prime contractor and merchant supplier. Its main products include launch vehicles and related propulsion systems; missile products, subsystems and defense electronics; precision weapons, armament systems and ammunition; satellites and associated space components and services; and advanced aerospace structures. Headquartered in , employs more than 12,000 people in 20 states across and in several international locations. For more information, visit www.orbitalatk.com.