May 9, 2016-- (NYSE: OA), a global leader in aerospace and defense technologies, in partnership with , has completed installing the second Space Launch System (SLS) booster qualification motor, QM-2, in a specialized test stand in in preparation for a static-fire test. QM-2 is the second of two -developed motors to support qualification of the boosters for NASA s SLS, which is a heavy-lift rocket designed to enable exciting new deep space exploration missions. The first qualification motor, QM-1, completed a successful test last spring. 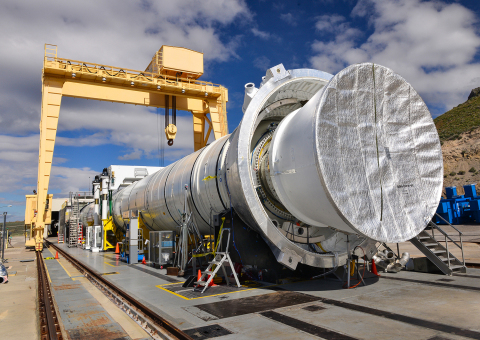 The five-segment solid rocket motor that will be used for Space Launch System has been installed in a specialized test stand and is being prepared for a ground test in . (Photo: Business Wire)

While last year s QM-1 test validated motor performance at the upper end of the propellant temperature range, personnel are cooling QM-2 to 40 degrees Fahrenheit to test its lower temperature capabilities against the required temperature range. Lying horizontally in the test stand, the motor is 154 feet in length and 12 feet in diameter. When fired, QM-2 will produce 3.6 million pounds of maximum thrust.

The SLS five-segment motor is based on the design heritage of the flight-proven solid rocket boosters used on NASA s Space Shuttle and incorporates new technologies and updated materials.

Throughout the Space Shuttle Program, we regularly monitored and enhanced our motor design, and we have made further modifications to our booster for NASA s new SLS, said Precourt, a four-time space shuttle astronaut and former chief of the astronaut office. Having personally experienced the power of these motors and been a part of these modifications, I can attest to their reliability.

The SLS, along with NASA s Orion spacecraft, provides a flexible deep space exploration platform to take humans and cargo to multiple destinations across our solar system. Orion successfully experienced its first flight test in , orbiting twice around the Earth and flying as far away as 3,600 miles more than 15 times farther than the and farther than a human spaceflight vehicle has traveled in 40 years.

The first test flight of SLS and Orion together, called -1, is scheduled for 2018. EM-1 will use two of Orbital ATK s five-segment solid rocket boosters.

Recent SLS and Orion milestones include: