May 27, 2015-- (NYSE: OA), a global leader in aerospace and defense technologies, today announced that the SKY MEXICO-1 (SKYM-1) satellite, built by the company for , was successfully delivered to orbit aboard an Ariane 5 rocket and is operating as planned early in its mission. 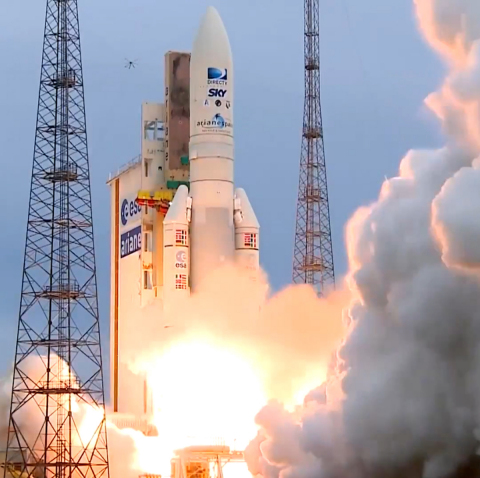 An Ariane 5 rocket lifts off on in carrying the built SKYM-1 commercial satellite. (Photo: )

The lift-off of the Ariane rocket occurred today as planned at from the launch site in Kourou, .

The satellite successfully separated from the launcher approximately 38 minutes into the mission, placing it into its targeted geosynchronous transfer orbit. engineers have completed the initial post-launch health check and the configuration of the satellite in preparation for several weeks of orbit-raising activities and in-orbit tests, after which the spacecraft will be placed in its final orbital slot. The in-orbit testing will ensure that all satellite subsystems are functioning properly before SKYM-1 is officially turned over to for full operational control.

The SKYM-1 satellite is based on Orbital ATK s flight-proven GEOStar-2 platform and will provide direct-to-home television broadcast services to , and the for . produced the satellite in just 20 months and delivered it to the launch site four months ahead of the original baseline schedule.

The early indications from our initial checkout and testing process show that the satellite is performing well, said , Vice President and General Manager of Orbital ATK s commercial satellite division. SKYM-1 marks the first satellite we built for and represents what we hope is the start of a valued relationship for years to come. This mission demonstrates our continued ability to deliver high-quality, reliable satellites to our customers on time and demonstrates that truly is a partner you can count on.

Built and manufactured at its state-of-the-art facility in , SKYM-1 is equipped with 24 active Ku-band transponders and two active R-band transponders to provide DIRECTV s premium video broadcast services to millions of users. The commercial communications satellite uses reflectors, solar arrays and structural components produced by Orbital ATK s Space Components Division in and . At launch, the spacecraft weighed 2,962 kg (6,530 pounds) and carried sufficient fuel on board to provide an anticipated 20-year mission life.