Apr. 6, 2018-- (NYSE: OA), a global leader in aerospace and defense technologies, today announced the HYLAS 4 commercial communications Ka-band satellite, built by the company for (), was successfully launched aboard an rocket. HYLAS 4 is the third GEOStar-3 satellite to be completed by and will provide high speed and affordable broadband communications to and . 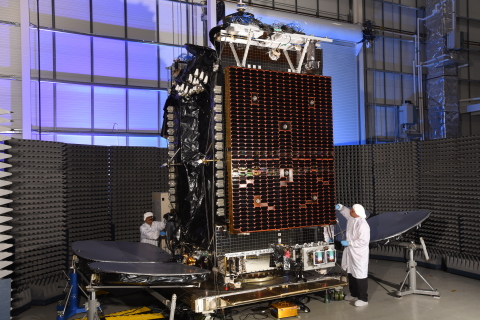 Liftoff occurred at from Kourou, . The satellite separated successfully from the launch vehicle approximately 35 minutes into the mission after reaching its targeted orbit. completed the satellite s initial post-launch health check and configuration in preparation for orbit-raising procedures and in-orbit tests. The spacecraft handover to is anticipated in April.

The data from initial testing shows the satellite is in good health and performing as expected, said , Vice President of the Commercial Satellite business at . As the third GEOStar-3 satellite to launch within three months, HYLAS 4 demonstrates Orbital ATK s ability to develop and execute an enhanced product that offers increased capability to meet our customers emerging needs.

HYLAS 4 was built in Orbital ATK s satellite manufacturing facility in . It is a hybrid electric propulsion and all Ka-band high-throughput satellite that sets a new standard for affordability and payload flexibility in its class. The satellite will extend Avanti s Ka-band coverage across , the and Sub-Saharan Africa. Furthermore, additional capacity can be provided through four steerable beams, which can address existing regions or new regions such as .

The GEOStar-3 platform is the newest, highest power and most advanced platform in the flight-proven GEOStar product line. The spacecraft bus features an increase in both battery capacity and solar array power, enabling the GEOStar-3 to provide up to 8 kilowatts of power to the payload. The hybrid electric propulsion system provides the benefits of higher power and greater payload capability while maintaining cost-effective launches and a faster path to orbit than all electric systems.

connects people wherever they are in their homes, businesses, in government and on mobiles. Through the HYLAS satellite fleet and partners in 118 countries, the network provides ubiquitous internet service to a quarter of the world s population. delivers the level of quality and flexibility that the most demanding telecoms customers in the world seek. is the first mover in high throughput satellite data communications in EMEA. It has rights to orbital slots and KA-band spectrum in perpetuity that covers an end market of over 1.7bn people. The Group has invested in a network that incorporates satellites, ground stations, datacentres and a fibre ring.

has a unique Cloud-based customer interface that is protected by patented technology. is listed in on AIM (AVN: LSE). www.avantiplc.com