Feb. 1, 2018-- (NYSE: OA), a global leader in aerospace and defense technologies, today announced the successful launch of the GovSat-1 multi-mission satellite. built the satellite for GovSat, a public-private partnership between the Government of and world-leading satellite operator SES. GovSat-1 launched aboard a SpaceX Falcon 9 rocket and marks the second GEOStar-3 satellite built by to launch this month. It will be used to provide service to governmental and institutional customers. 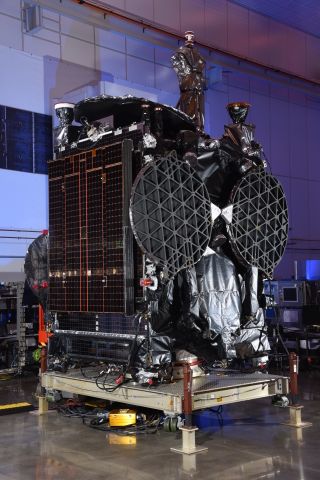 Liftoff occurred on at from , . The satellite separated successfully from the launch vehicle approximately 32 minutes into the mission after reaching its targeted orbit. completed the satellite s initial post-launch health check and configuration in preparation for 16 days of orbit-raising procedures and in-orbit tests. Once testing has been completed, operational control of GovSat-1 will be handed over to GovSat.

Our initial testing of GovSat-1 shows the satellite is performing nominally, said , Vice President of the Commercial Satellite business at . The company has previously delivered six GEOStar satellites to SES, one of GovSat s shareholders. GovSat-1 demonstrates continued confidence in the company s GEOStar products.

GovSat-1 was built in Orbital ATK s satellite manufacturing facility in . It is an X-band and military Ka-band satellite that provides high-powered and fully steerable spot beams for multiple government missions. The satellite will be positioned on the European geostationary orbit arc and provide coverage to , the and , along with extensive maritime coverage over the Mediterranean and Baltic seas, and the .

The GEOStar-3 platform is the newest, highest power and most advanced platform in the flight-proven GEOStar product line. The spacecraft bus features an increase in both battery capacity and solar array power. An additional GEOStar-3 satellite is planned for launch this year.

GovSat is a public-private partnership between the Government of and the world-leading satellite operator SES. GovSat s mission is to provide secure, reliable and accessible governmental satellite communication services to address the demand resulting from defence and institutional security applications. The company s first satellite GovSat-1 is a multi-mission satellite that will use X-band and Military Ka-band frequencies on high-power and fully steerable mission beams to support multiple operations. For more information visit: www.govsat.lu