Oct. 11, 2016-- (NYSE:OA), a global leader in aerospace and defense technologies, today announced the company has been awarded its first contract with (NYSE Euronext Paris:ETL) to build the 5 West B satellite. The company will team with Airbus Defence and Space to build 5 West B, marking the first time the two have partnered on satellite work. Relying on the two companies extensive heritage in the satellite industry, 5 West B will be based on Orbital ATK s GEOStar satellite platform while Airbus Defence and Space will provide the communications payload of 35 active Ku-band channels. 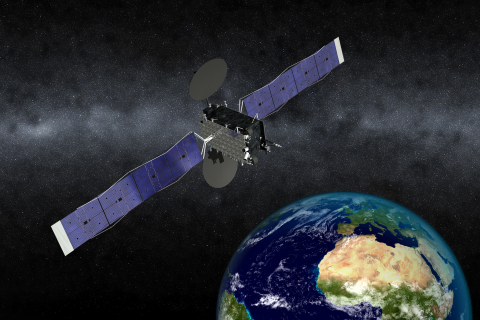 The spacecraft will be designed, built and tested at Orbital ATK s state-of-the-art satellite manufacturing facility in . 5 West B will have an operational lifetime of more than 15 years as a broadcast satellite, replacing the current satellite at Eutelsat s 5 West longitude orbit slot. Once 5 West B is positioned in geostationary orbit, it will serve mainly video markets in and .

Eutelsat is a global leader in satellite operations and we are proud to provide them with a spacecraft built on our innovative, reliable and affordable GEOStar product line, said , Vice President of the Commercial Satellite Business at . With Airbus Defence and Space providing the payload and using our flight-proven bus design, we are confident the team will deliver a high-quality broadcast satellite.

5 West B is scheduled for launch in 2018 aboard an International Launch Services (ILS) Proton vehicle from Baikonur Cosmodrome in . It will be the 41st commercial satellite ordered and built by .

Orbital ATK s (SSG) is an industry leader in satellite technology and advanced rated space systems providing a broad portfolio of products and services for commercial, military, civil government and international customers. The Group designs, manufactures and operates small to medium-class satellites for communication, imaging, science, human exploration and military operations. SSG also specializes in market-leading integrated thermal control systems, space components that power and enable satellites of all classes, satellite servicing technology and premier technical engineering services to government agencies and laboratories. is currently producing additional commercial satellites for , and that will be delivered and launched over the next year.