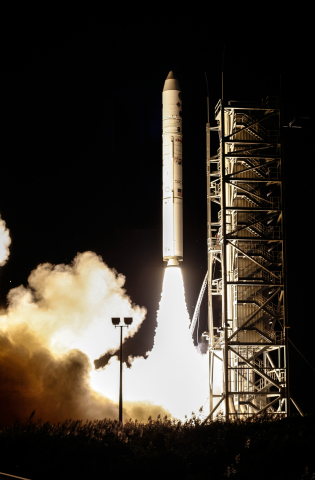 An Orbital ATK Minotaur IV launched Ladee spacecraft on its mission to the moon on . Minotaur Vehicles provide the lowest-cost launch option for small and medium-class payloads. (Photo: Business Wire)

The ORS-5 mission will employ an Orbital ATK Minotaur IV rocket lifting off from -46, operated by Space Florida at . This will be the first time a Minotaur vehicle will have flown from this range.

Launching from the Cape adds another capability to our program and brings us to four ranges from which Minotaur can launch, said , Vice President and General Manager of Orbital ATK s Launch Vehicles Division. This flexibility and multiple vehicle configurations enables Minotaur launch vehicles to be tailored to meet mission requirements while offering the lowest cost flight-proven launch vehicles available to the U.S. government.

Using a launch vehicle comprised of solid rocket motors requires minimal pad infrastructure, which helps lower mission costs. The team will integrate the final launch vehicle using the team at the Cape with a team comprised of employees from both Orbital and ATK heritage companies.

This is a prime example of where the synergies from the merger are providing real benefits to our customers, by being able to deploy one launch team that possesses expertise from critical propulsion and avionics subsystems, to the full systems engineering understanding of the vehicle, said , President of Orbital ATK s .

The award was won as a competitive commercial launch contract for the Operationally Responsive Space Office and will be licensed by the .

The Minotaur family of vehicles has carried out 25 consecutive launches with a 100% mission success record and has placed a total of 74 satellites into orbit. Employing a combination of U.S. government-supplied rocket motors and proven commercial launch technologies provides incredible cost-savings for government payloads, enables the U.S. to compete with other countries who use their retired assets for commercial launch and keeps a critical skilled workforce employed.