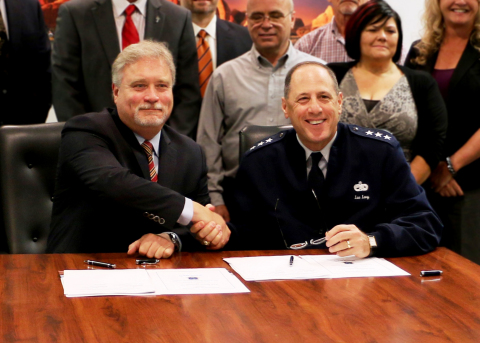 This partnership agreement will facilitate strategic teaming to address future composite aerostructure needs on new aircraft platforms or the Maintenance, Repair and Overhaul (MRO) of existing platforms. The combined capability of the three U.S. Air Force MRO depots that comprise the Sustainment Center and will enable opportunities to assist each other in on-going programs and contracts.

"It is remarkable that the world s leading centers for advanced composite fabrication can partner long-term to increase the efficiency and effectiveness of all operations involved and ultimately increase the speed at which aircraft are repaired and returned to the field, said U.S. Air Force Lieutenant General , Commander, Sustainment Center, Air Force Materiel Command, , Oklahoma.

"This partnership is a great opportunity to combine the complementary capabilities in advanced composite materials fabrication, test and inspection held by the U.S. Air Force Sustainment Center and to increase the efficiency and effectiveness of both operations, said , Vice President and General Manager of Aerospace Structures Division. We have great admiration for the U.S. Air Force Sustainment Center and are honored to enter into this partnership agreement.

The U.S. Air Force Sustainment Center has a long history of providing sustainment and logistics readiness to deliver combat power for America. Included within this sustainment activity are advanced composite structures fabrication, inspection and repair capabilities that have been vital to the MRO of the nation s most advanced military aircraft. has been extensively involved in the design, development and fabrication of multiple composite structures ranging from filament wound rocket motor cases produced since the 1950's to critical structural components for advanced military aircraft, such as the F-35 Lightning II combat fighter, and new-generation commercial platforms, such as the 787 Dreamliner and Airbus A350 widebody aircraft.