May 18, 2016-- (NYSE: OA), a global leader in aerospace and defense technologies, today advocated for a manned lunar-orbit outpost as America s next step in human space exploration. 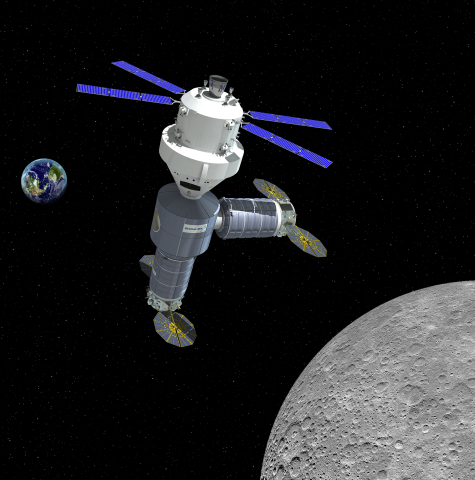 Artist rendering of Orbital ATK s initial lunar outpost, as it would appear with NASA s Orion spacecraft in 2021 (credit: ).

During testimony this afternoon to the Subcommittee on Space, , President of the company s , said, A lunar-orbit habitat will extend America s leadership in space to the cislunar domain. A robust program to build, launch and operate this initial outpost would be built on NASA s and our international partners experience gained in long-duration human space flight on the and would make use of the agency s new Space Launch System (SLS) and Orion deep-space transportation system.

was recently selected by to study an initial version of a cislunar habitat that could evolve over time to a much larger research platform with many of the capabilities required for a human mission to Mars. These studies fall under NASA s Next Space Technologies for Exploration Partnerships (NextSTEP) program, a public-private partnership model that seeks commercial development of deep-space exploration capabilities to support more extensive human space flight missions in the proving ground of cislunar space, the region from Earth orbit that extends beyond the moon.

During his testimony, Mr. Culbertson emphasized that Orbital ATK s Cygnus spacecraft is a strong candidate to be used as a habitat building block for the cislunar outpost and eventually to help achieve NASA s goal of human exploration of Mars.

The experience gained in the cislunar proving ground will lead directly to longer mission durations in deep space and eventually enable a manned mission to Mars, Culbertson said. But, in order to increase stay times in cislunar space and accommodate a range of technology demonstrations and scientific experiments, additional habitation space and consumables are necessary. A very good starting point for the design of a cislunar habitat is our flexible, human-rated Cygnus spacecraft which incorporates the knowledge gained from delivering cargo to the ISS.

The initial habitat concept includes pre-positioning a Cygnus-derived module in lunar orbit using a commercial launch vehicle in 2020, to be ready for a first visit by astronauts on the inaugural crewed flight of NASA s Orion spacecraft in 2021. Additional habitat and research modules would expand the outpost following delivery by Orion/SLS and other launch systems in the 2022-2025 period.

This concept would serve a dual purpose: to establish the first elements of cislunar infrastructure to enable expanded exploration of the Moon in the 2020s, and to also provide a platform for technology research and demonstration needed to enable human flights to Mars in the 2030s. , the and other international partners also could use the evolving outpost as a staging base and safe haven for lunar landing expeditions and robotic surface operations.

Since many aspects of operations in deep space are as yet untested, confidence must be developed through repeated flights to, and relatively long-duration missions in, cislunar space, Culbertson said. Orbital ATK continues to operate our Cygnus cargo logistics vehicle as a flagship product, so we are ready to quickly and affordably implement an initial Cygnus-derived habitat in cislunar space within three years of a go-ahead.

has already expanded the capabilities of Cygnus beyond its core cargo delivery function. The spacecraft is serving as a research platform capable of hosting technology risk-reduction demonstrations to enable deep-space exploration as part of existing cargo delivery missions to the ISS. The first technology demonstration, Spacecraft Fire Experiment-1 (SAFFIRE-1) designed by NASA s , is currently in-orbit aboard the OA-6 Cygnus. Following Cygnus departure from the ISS next month, the largest man-made fire ever in space will be ignited in the Cygnus Pressurized Cargo Module, which will enable to investigate fire detection, advanced fire extinguishing methods, and post-fire clean up in a space environment.