BALTIMORE – March 8, 2021 – Northrop Grumman Corporation (NYSE: NOC), has been selected by NASA to provide solid propulsion systems and controls for NASA’s Mars Ascent Vehicle (MAV). The MAV will be launched to Mars in 2026 along with a “fetch” rover that will collect soil and rock samples prepared by NASA’s Perseverance rover, which launched in July 2020 and landed on Mars Feb. 18. 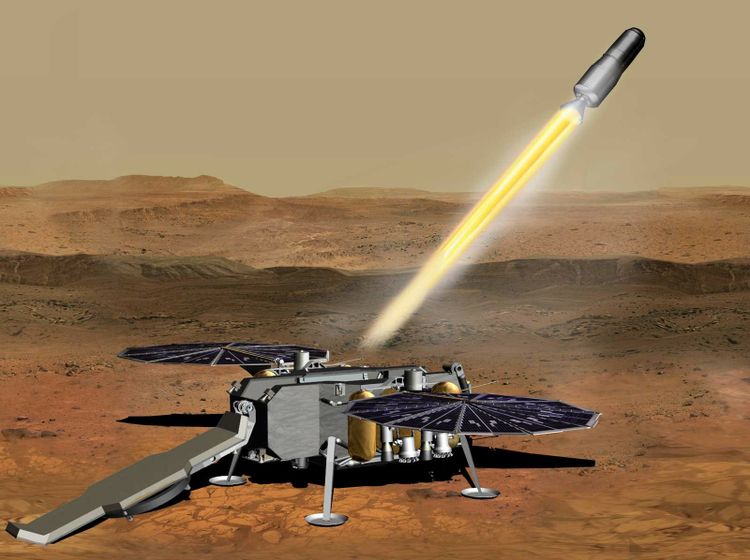 This illustration shows a concept of how the NASA Mars Ascent Vehicle, carrying tubes containing rock and soil samples, could be launched from the surface of Mars in one step of the Mars sample return mission. NASA/JPL-Caltech

“We are committed to help build the rockets that will orbit the samples Perseverance collects so they can be returned to Earth,” said Rebecca Torzone, vice president, missile products, Northrop Grumman. “We play a vital role with NASA, as we have for decades, by providing key propulsion and control subsystems in support of human spaceflight and robotic exploration missions.”

Northrop Grumman will provide its STAR™ first and second stage high performance solid rocket motors, the first stage thrust vector control system and the second stage spin rockets for the MAV. Once the MAV and fetch rover arrive on the Red Planet’s surface, the fetch rover will spend approximately 18 months collecting samples and transferring collection tubes to the MAV for storage. Upon mission completion, the MAV will launch back into Mars’ orbit to rendezvous with the Earth Return Orbiter. Northrop Grumman’s propulsion and control system’s performance is critical to achieving a precise rendezvous orbit.

Similar to the advances scientists have made in studying samples from the moon for decades, current and future NASA scientists will study the samples returned from Mars to learn more about the Red Planet’s composition. The overall campaign also supports efforts to one day send humans to Mars. Work under the contract will be performed in Elkton, Maryland, and San Jose, California.