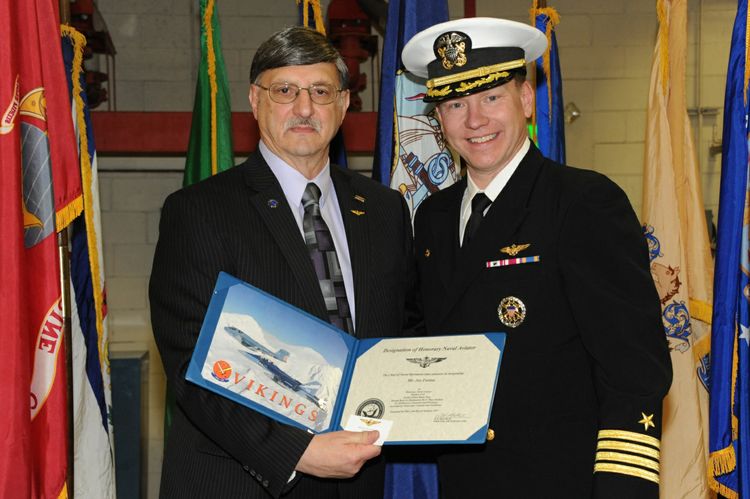 Northrop Grumman employee Joseph J. Farina has been designated an honorary naval aviator for his “truly extraordinary” contributions to naval aviation. Farina is the 29th recipient of the award since the program began in October 1949.

Farina, a senior logistics field representative for Northrop Grumman, was cited for providing more than four decades of support to the U.S. Navy and the airborne electronic attack community on hundreds of successful major carrier and expeditionary deployments and numerous contingency and combat operations.

For 42 of his 53 years with the company, Farina was the face of Northrop Grumman at Whidbey Island. To numerous naval commands, wings, squadrons and supply depots and thousands of aircrew who called him “Papa Joe,” Farina was the link to the company to ensure the EA-18G Growlers of today and the EA-6B Prowlers and A-6 Intruders of the past were always ready for combat.

“No airborne electronic attack squadron has missed an operation or combat sortie during his four decade watch,” said Estes.

Before moving to Whidbey Island in 1975, Farina worked on the team that designed, assembled, integrated and tested the Lunar Module for the Apollo program in Cape Canaveral, Florida. He received the Manned Space-Flight Awareness Award from NASA for his work on Apollo 16.

Farina joined Grumman Aircraft Engineering Corp. in Bethpage, New York, in 1964. After service spanning eight presidential administrations and touching the lives of thousands of warfighters and their families, he will officially retire on Feb. 24.