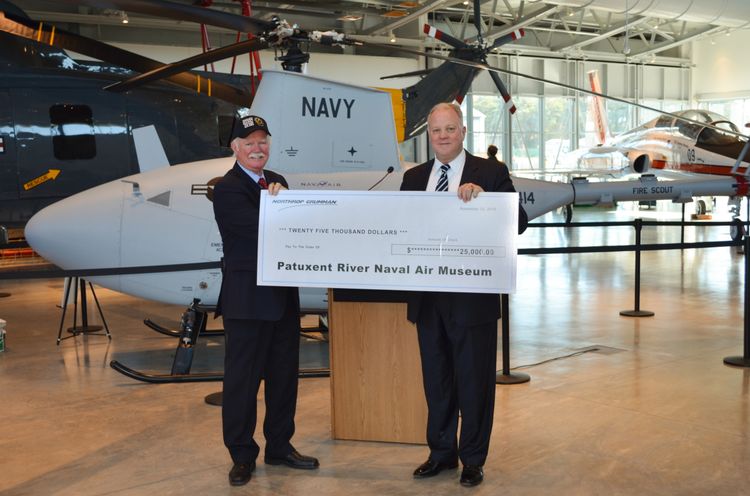 Scott Stewart, Northrop Grumman lead executive for the Naval Air Systems Command (right), presents a copy of the check for Northrop Grumman’s $25,000 donation to George Hill, Patuxent River Naval Air Museum president. The donation is part of a pledge to the museum which will total $100,000.  Behind them is a U.S. Navy MQ-8B Fire Scout unmanned helicopter, on display at the museum.  The Fire Scout, developed by Northrop Grumman, is a combat proven, unmanned helicopter system that provides real-time Intelligence, surveillance and reconnaissance (ISR), target-acquisition, laser designation, and battle management to tactical users without relying on manned aircraft or space-based assets. Fire Scout has the ability operate from any air-capable ship or land base in support of persistent ISR requirements.

Scott Stewart, Northrop Grumman lead executive for the Naval Air Systems Command presented the check last Saturday as part of STEM Day at the museum, an official event of the 2016 Maryland STEM Festival.

Stewart said that as a former F-14 Naval aviator he could appreciate what a significant asset the museum is for the Pax River community and the valuable role it plays helping young people become more excited about science, technology, engineering and mathematics (STEM).  “All of the aircraft you see here on these hallowed grounds play a vital role in preserving the legacy of naval aviation as well as showcasing the latest military technology. I am confident that this museum will serve as a science and technology incubator for our local youth for many years to come.”

Northrop Grumman has more than 10,000 employees across Maryland and more than 400 employees in the Pax River community. Naval Air Station Patuxent River is home to some of Northrop Grumman and the Navy’s most significant accomplishments including the development of the Navy Unmanned Combat Air System Demonstrator program -X-47B - which demonstrated the first autonomous aerial refueling of an unmanned aircraft and also was the first unmanned aircraft to safely and successfully land aboard and launch from an underway aircraft carrier.

Northrop Grumman supports other STEM initiatives in Maryland such as the High School Engineering Scholars program, and the High School Involvement Program – which both provide college scholarships to Maryland students pursuing STEM education degrees; a science, technology, engineering, arts and mathematics partnership with Baltimore City schools and the University of Maryland, Baltimore County (UMBC); and the CyberPatriot high school cybersecurity competition, which this year will involve 4,000 schools and last year held its national finals in Baltimore for the first time.

Northrop Grumman has taken a leading role in helping Maryland, and the nation, build a stronger, more diverse and STEM qualified workforce for tomorrow – particularly in the area of cybersecurity.  The Northrop Grumman Foundation has made a significant donation to the University of Maryland to launch and now sustain its Advanced Cybersecurity Experience for Students program, the nation’s first honors program in cybersecurity.  This innovative interdisciplinary, living-learning initiative will prepare students in the key technical, policy, behavioral and social science components of cybersecurity that they will need to be tomorrow’s leaders.

Through a substantial gift from the Northrop Grumman Foundation, the UMBC Cyber Scholars Program was created to prepare the next generation of cybersecurity professionals in an increasingly digital age, with a focus on increasing the participation of women and other underrepresented groups in this fast-growing field.

Northrop Grumman Named a 2018 “Best Place to Work for Disability Inclusion” and Receives the “Employer of the Year: Inspire Award”