PROMONTORY, Utah – Dec. 13, 2018 – Northrop Grumman Corporation (NYSE: NOC) along with NASA and Lockheed Martin successfully performed a ground firing test of the abort motor for NASA’s Orion spacecraft Launch Abort System (LAS) at Northrop Grumman’s facility in Promontory, Utah. The abort motor is a major part of the LAS, which provides an enhancement in spaceflight safety for astronauts. The completion of this milestone brings Orion one step closer to its first flight atop NASA’s Space Launch System and to enabling humans to explore the moon, Mars and other deep space destinations beyond low-Earth orbit. 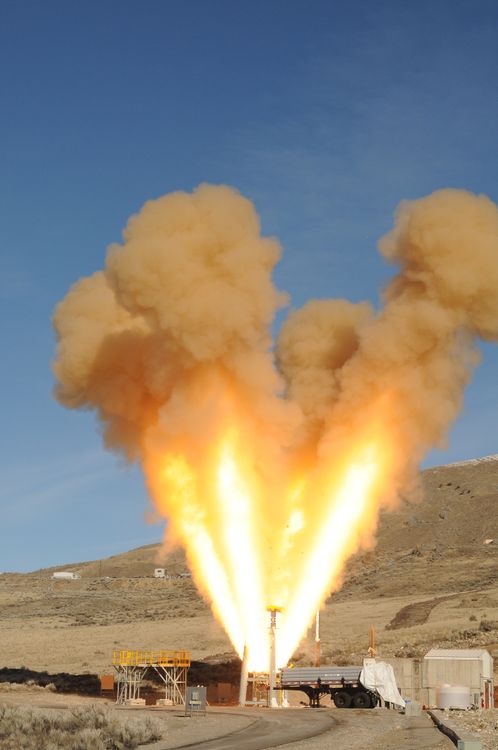 Today’s test firing of the Northrop Grumman-manufactured launch abort motor in Promontory, Utah, confirmed the motor can activate within milliseconds and will perform as designed under cold temperatures.

“Our astronauts’ safety is our top priority,” said Steve Sara, director, launch abort motor program, Northrop Grumman. “We never expect the launch abort motor to be used, but just like an ejection seat in a fighter pilot's aircraft, if they need it, it needs to work every time.”

The mission for Orion’s LAS is to safely jettison the spacecraft and crew out of harm’s way in the event of an emergency on the launch pad or during initial launch ascent. Today’s abort motor test, Qualification Motor-2, was the culmination of a series of component tests conducted over the past few years in preparation for qualification. Data from the test will confirm the motor can activate within milliseconds and will perform as designed under cold temperatures.

The abort motor, which stands over 17 feet tall and spans three feet in diameter, has a manifold with four exhaust nozzles. With its nozzles pointing skyward, it fired for five seconds; the exhaust plume flames reached approximately 100 feet in height. The high-impulse motor burns three times faster than a typical motor of this size, delivering the thrust needed to pull the crew module to safety. The motor achieved approximately 350,000 pounds of thrust in one eighth of a second, as expected. More analysis will be performed in the coming weeks, but all initial results indicate a successful test.

For the AA-2 flight test, in addition to the launch abort motor Northrop Grumman will also provide the Abort Test Booster (ATB), which will launch NASA’s Orion spacecraft and LAS to on a preplanned trajectory to obtain data to be used for LAS performance assessment. The ATB uses the same rocket motor as the first stage of a Minotaur IV rocket.