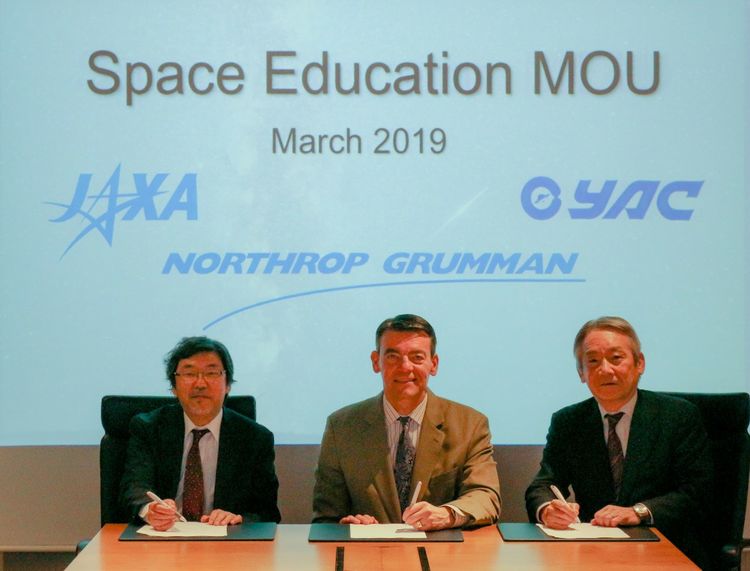 “I am delighted about signing this agreement with our partners, JAXA and YAC,” said Stan Crow during the signing ceremony. “This partnership, in support of STEM education, will help inspire the next generation of space pioneers.”

Under the terms of the MoU, the three partners will develop space-related education programs in Japan and the U.S. These programs will encourage students to consider careers in the space industry as they also develop important skills such as teamwork and critical thinking.

“This cooperation agreement underscores the YAC of Japan’s work in support of young people who dream of exploring space. We look forward to bringing the spirit of the MoU to life,” said Mamoru Endo.

Nozomu Sakuraba added, “Our mission at JAXA is to pursue innovative research and development in the aerospace field for the benefit of people throughout the world. Cooperation with companies such as Northrop Grumman and organizations such as YAC help us realize this mission.”

The Young Astronauts program was established in 1984 by U.S. president Ronald Reagan and journalist Jack Anderson with the goal of using space to encourage students to take a greater interest in math and science. Reagan also wanted the Young Astronauts to develop friendships with the future space explorers of other countries. The Young Astronauts Club (YAC) of Japan held an inaugural meeting in August 1986 in Tsukuba city in Ibaraki prefecture and by November, the club was officially established with the approval of the Japanese prime minister. The YAC of Japan became a Public Interest Incorporated Foundation in August 2012. Since its establishment, the club has led space education and international exchange activities for youth across Japan. For further information, please visit: http://www.yac-j.or.jp/english/index.html.

The Japan Aerospace Exploration Agency (JAXA) was born through the merger of three institutions, namely the Institute of Space and Astronautical Science (ISAS), the National Aerospace Laboratory of Japan (NAL) and the National Space Development Agency of Japan (NASDA). It was designated as a core performance agency to support the Japanese government's overall aerospace development and utilization. JAXA, therefore, can conduct integrated operations from basic research and development, to utilization. JAXA became a National Research and Development Agency in April 2015, and took a new step forward to achieve optimal R&D achievements for Japan, according to the government's purpose of establishing a national R&D agency.