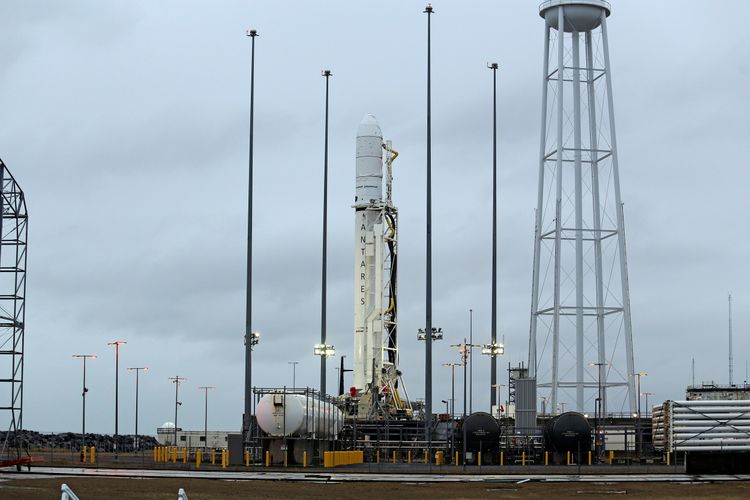 Northrop Grumman's Antares rocket sits on the launch pad at NASA Wallops Flight Facility in preparation for the Feb. 9 launch of the S.S. Robert Henry Lawrence Jr. Cygnus spacecraft to the International Space Station for the NG-13 mission.

The launch is scheduled for Feb. 9 at 5:39 p.m. ET from the Mid-Atlantic Regional Spaceport Pad 0A on Wallops Island, Virginia, at NASA’s Wallops Flight Facility, with rendezvous and berthing at the station to occur on Feb. 11. The mission will use the Antares 230+ configuration and will conduct a 24-hour late load operation.

“Antares is Northrop Grumman’s workhorse for providing commercial cargo delivery to the space station,” said Scott Lehr, vice president and general manager, launch and missile defense systems, Northrop Grumman. “The capability to load cargo just before launch, and the increased performance of Antares, provides NASA with the flexibility they can depend on for timely and cost effective Space Station resupply.”

For the NG-13 mission, Cygnus will carry approximately 7,500 pounds (3,400 kilograms) of cargo for the crew aboard the station. This marks the second time two Cygnus spacecraft will be in flight at the same time as the NG-12 vehicle, which remains in orbit after departing from the station on Jan. 31.

“Northrop Grumman’s Cygnus spacecraft has undergone a number of upgrades throughout our 13 missions,” said Frank DeMauro, vice president and general manager, tactical space systems, Northrop Grumman. “We continue to offer NASA and our commercial customers a reliable spacecraft that not only delivers vital cargo, but is also a fully functioning science laboratory in space and has now demonstrated its ability to perform long-duration in-orbit operations.”

Once Cygnus is grappled to the International Space Station, the spacecraft will remain attached for approximately three months before departing with up to 8,200 pounds (approximately 3,720 kilograms) of cargo for disposal.

On this mission, Cygnus will once again host the Spacecraft Fire Safety Experiment – IV (Saffire-IV) providing an environment to safely study fire in microgravity. The Saffire experiment, designed by the NASA’s Glenn Research Center, has flown on three previous Cygnus missions. NG-13 will also support CubeSat deployments via SEOPS SlingShot deployer and a SEOPS hosted payload. This underscores how the Cygnus spacecraft continues to serve scientific needs and commercial business in low-Earth orbit through the second phase of its resupply missions to the space station.

Northrop Grumman names each Cygnus spacecraft in honor of individuals who have significantly contributed to the United States’ commercial space program. For the NG-13 mission, the company commemorates astronaut Major Robert Henry Lawrence Jr., the nation’s first African American astronaut. In 1967, the U.S. Air Force selected Lawrence as an astronaut for the Manned Orbiting Laboratory program. Although his career was cut short in a tragic accident, he paved the way for future aerospace pioneers and highlighted the need for diversity and inclusion across the industry.

Live coverage of the Antares launch and Cygnus capture and installation at the space station will be available on NASA Television at http://www.nasa.gov/live. Details about the mission including a map to show where you might see the launch are available here.

Northrop Grumman solves the toughest problems in space, aeronautics, defense and cyberspace to meet the ever-evolving needs of our customers worldwide. Our 90,000 employees define possible every day using science, technology and engineering to create and deliver advanced systems, products and services.