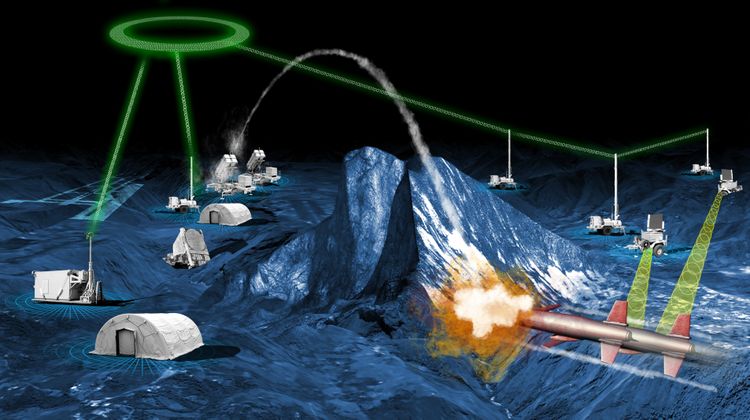 During three weeks of U.S. Army-led testing in April and May, IBCS continued to validate its enterprise-level approach to air and missile defense by digesting complex information to target a series of representative aerial threats. This demonstration built upon the earlier multi-node distributed test, another successful soldier checkout event conducted over five weeks in March and April. In that soldier checkout event, IBCS showed that it can scale up and network across long distances.

In the live air test, IBCS demonstrated its ability to combine data from sensors and multiple information sources to accomplish simulated engagements of both real and simulated fixed-wing, rotary-wing, cruise missile and tactical ballistic missile targets.

Military aircraft such as F-15 and F-16 fighters and the slower-moving C-12 turboprop were used as surrogates, replicating the flight patterns of adversary threats along a flight corridor of the White Sands Missile Range.

The test was designed to evaluate various hardware and software functions of the Army’s future IAMD “system of systems,” of which Northrop Grumman’s IBCS is the centerpiece. Twenty major IBCS components were involved in the trial, including IBCS engagement operations centers and integrated fire control network relays.

The test had a number of key objectives, including: the exercise of launcher and sensor controls in a live environment; conduction of simultaneous simulated engagements of multiple aerial targets; integration with the Link 16 tactical data and Automatic Dependent Surveillance-Broadcast (ADS-B) air traffic management networks; and contribution to the joint single integrated air picture.

“IBCS continues to show high levels of performance and reliability,” said Dan Verwiel, vice president and general manager, missile defense and protective systems, Northrop Grumman. “As the command-and-control backbone of the Army’s future air and missile defense enterprise, IBCS will undergo increasingly complex tests as it works through development and prepares for operational fielding in the future.”

“In a dynamic and changing environment, taking advantage of the open, non-proprietary, configurable nature of an IAMD enterprise is imperative for enabling warfighter capabilities to outpace threats and allowing for the addition of capabilities not previously planned at a much reduced cost,” added Bill Lamb, director, integrated air and missile defense, Northrop Grumman.

“IBCS makes legacy systems relevant for today, and provides a path for the next-generation of IAMD that is affordable. Continued testing with Army soldiers in realistic environments is the best way to ensure IBCS and the wider Army IAMD architecture is ready to meet the operational needs of the warfighter.”

Information gathered through this type of soldier checkout testing builds confidence in IBCS with the warfighter and enables the Army to consider early capability spin-out. The open, non-proprietary nature of the software allows for quick turnarounds for improvements, as informed by rigorous testing.

The “plug and fight” architecture of IBCS provides a highly integrated next-generation air and missile defense solution to the Army. It enables “any-sensor, best-shooter” operations with a greatly expanded single integrated air picture.

IBCS is also the air and missile defense command-and-control solution of choice for Poland, which signed a Letter of Offer and Acceptance with the U.S. government in March to purchase the system. Poland will become the first international operator.