This effort, which is a follow-on to the successful operation during Unmanned Warrior in Scotland, in October 2016, demonstrated the high area coverage rate (ACR) achievable through combining the Atlas Elektronik UK ARCIMS unmanned surface vessel (USV) and Northrop Grumman’s AQS-24B mine hunting system.  The ARCIMS USV has proven to be an extremely stable platform ideally suited for towing the high-speed AQS-24B in rough seas.  The exercise not only demonstrated the modularity and ease of integration of the AQS-24B payload, but also the importance of the laser line scan sensor which serves as a gap filler for the high speed synthetic aperture sonar.

“Atlas Elektronik UK and Northrop Grumman are leading the way in demonstrating a capability that is real, mature and tested in relevant operational environments in the North Atlantic at the Royal Navy's unmanned warrior and now in the North Sea at the Belgian Navy's Zeebrugge sea areas,” said John Sutcliffe, director business development. “We, at AEUK, are excited about the future for unmanned systems and the potential that it offers for affordable and highly effective maritime capability.”

ATLAS ELEKTRONIK UK Ltd (AEUK) is a defence contractor in the naval and maritime systems domain, providing innovative products to governments in the UK, and around the world.  The Company specialises in maritime systems and technologies in ASW, MCM and are world leaders in the areas of hydro acoustics, sonars, electric drives, mission systems, underwater communications, submarine signatures and maritime security.

The ARCIMS Unmanned Surface Vehicle (USV) is one of the most successful in-service Maritime Autonomous Mission Systems.  It is the system of choice for several navies and is highly customisable for multiple mission roles including Minesweeping, Mine Hunting and Disposal and Coastal Surveillance and ASW, Hydrography, Maritime Security and Force Protection. 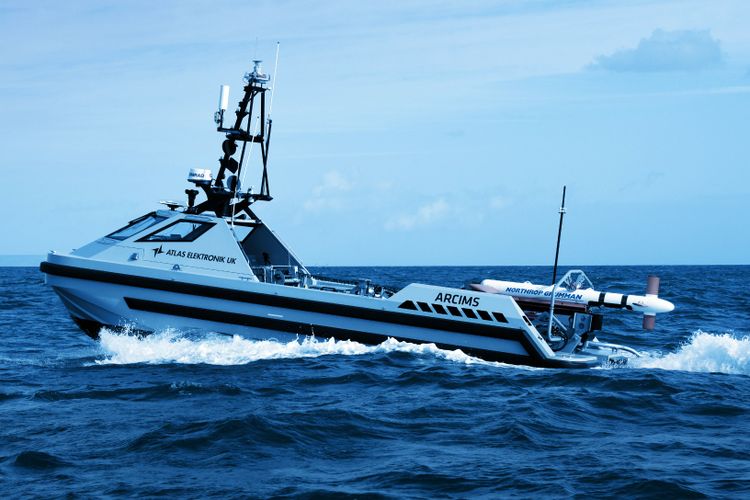