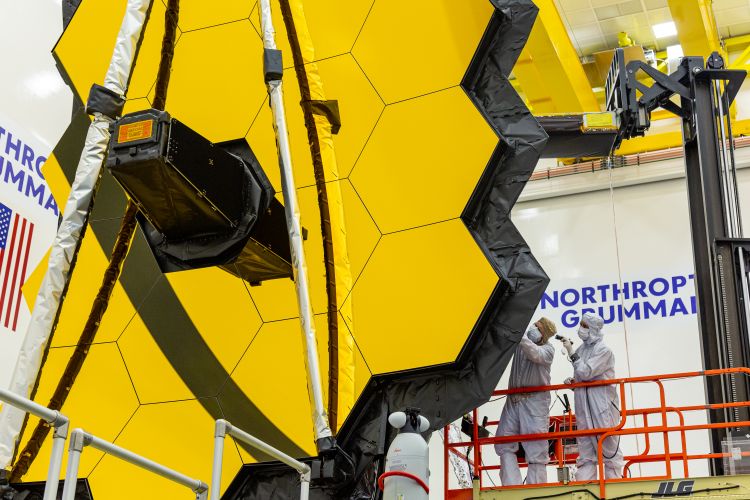 For the last time on Earth, the James Webb Space Telescope opened its primary mirror in May 2021 at Northrop Grumman in Redondo Beach, California where final deployment tests were completed. Webb’s iconic mirror is the world largest and most powerful ever built for space. Photo Credit: Northrop Grumman

L2 is a point in space about a million miles from Earth where the gravity of the sun and Earth create a semi-stable location where it is easy to maintain Webb’s orbit with a minimum of fuel.

Webb launched from the European Space Agency’s (ESA) Spaceport in Kourou, French Guiana on Dec. 25, stowed inside an Ariane 5 rocket. Over the course of two weeks after its historic launch, the space observatory successfully deployed its sunshield and mirrors during a series of complex deployments and maneuvers, the first of its kind ever attempted in space.

The team is turning its attention to making a series of fine adjustments to the telescope’s optics over the coming weeks and months to bring the telescope’s optical train into precise alignment. NASA anticipates that the observatory will be ready to send back its first science by mid-summer.

Webb is an infrared telescope designed to see the first light coming from the earliest stars and galaxies in the universe. Once operational, Webb will collect data and capture images for scientists back on Earth and explore farther than ever before into the cosmos, looking back over 13.5 billion years. To accomplish this, Webb incorporates innovative design, advanced technology, and groundbreaking engineering. Engineers developed 10 technological inventions for the telescope, including revolutionary optics, detectors and thermal control systems.