PROMONTORY, Utah and LOS ANGELES – Sept. 15, 2020 – Northrop Grumman Corporation (NYSE: NOC) and NASA have donated a set of flight-worthy solid rocket boosters from the Space Shuttle Program to the California Science Center, located in Los Angeles, California, to display with the Space Shuttle orbiter Endeavour and a real Space Shuttle external tank in a launch configuration. 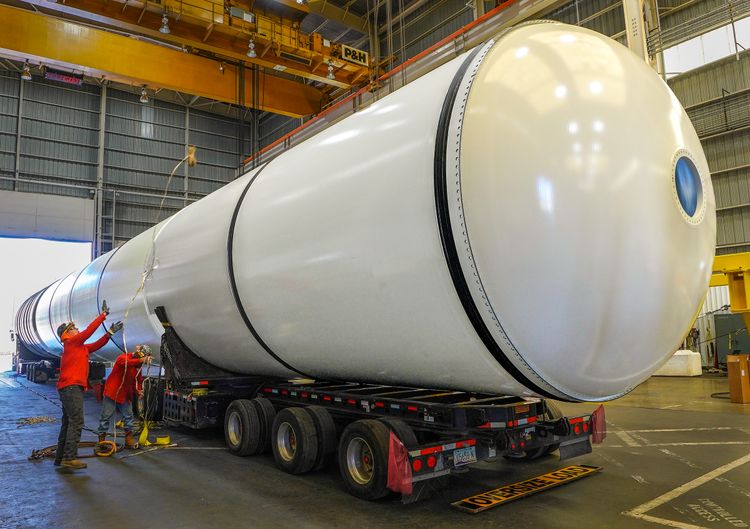 “The contributions made by the Space Shuttle Program to space science and exploration have been powerful,” said Charlie Precourt, vice president, propulsion systems, Northrop Grumman. “We are excited to share a piece of our more than 30 year legacy with future generations to help inspire a new era of explorers.”

The California Science Center’s goal for this exhibit is to preserve and display the only existing full stack of an orbiter, genuine solid rocket boosters, and external tank in the launch position. The Space Shuttle Endeavour will be the centerpiece in the future Samuel Oschin Air and Space Center, the Phase III expansion project of the Science Center.

After NASA awarded the last existing flight-worthy external tank (ET-94) to the Science Center Foundation in 2015, it became evident it would be critical to have a flight-worthy set of solid rocket boosters, not only for authenticity but also for seismic structural safety. Samuel Oschin Air and Space Center Project Director Dennis Jenkins made the request to Northrop Grumman.

The booster cases that Northrop Grumman is donating to the California Science Center have flown on a combined 81 space shuttle flights and have been part of 32 ground tests.

“As for the non-motor parts of the booster, we sourced a set of flight-worthy aft skirts and frustums from NASA surplus and a set of forward skirts that were used for tests for NASA’s Space Launch System (SLS) Program in Utah at Northrop Grumman,” said Jenkins. “Northrop Grumman and NASA are providing most of the smaller parts, like booster separation motors, from surplus.”

The donation of the shuttle boosters builds upon a more than decade long partnership the company has had with the Science Center. Northrop Grumman has sponsored the California State Science and Engineering Fair and several of the company’s employees volunteer their time each year to advance STEM education by supporting various events. The company also supports the center’s annual Discovery Ball.

Northrop Grumman and the Northrop Grumman Foundation are dedicated to expanding and enhancing STEM education opportunities for students globally. With an emphasis on middle school and university level students, our engineering and technology-based partnerships are designed to excite, engage and educate students as they defend cyber networks, engineer autonomous vehicles, explore space and more. In addition, we provide workforce-relevant professional development to middle school educators to advance their competence in teaching STEM subjects, in turn, inspiring students to explore STEM careers and increasing their skills proficiency. In 2019, we contributed over 15 million dollars towards these initiatives.