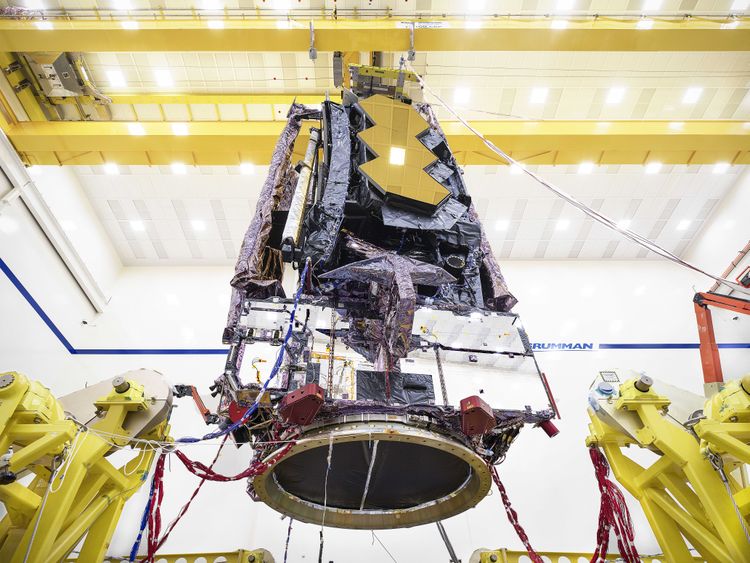 For the first time ever, testing teams at Northrop Grumman in Redondo Beach, California carefully lifted the fully assembled James Webb Space Telescope in order to prepare it for transport to nearby acoustic and sine-vibration testing facilities. Photo Credit: NASA/Chris Gunn

The environmental testing demonstrated Webb’s ability to withstand harsh environmental characteristics during its upcoming rocket launch and journey to reach its orbit at the second Sun-Earth Lagrange point (L2), approximately one million miles away from Earth.

“The completion of environmental testing is a major step forward in our preparations for Webb’s historic launch and a testament to the remarkable dedication of the team,” said Scott Willoughby, vice president and program manager, James Webb Space Telescope, Northrop Grumman.

Webb’s environmental testing consisted of a series of rigorous acoustic and sine-vibration tests spanning several weeks. Webb was first placed in Northrop Grumman’s acoustic testing chamber where it underwent high frequency oscillating sound pressure levels above 140 decibels to simulate the effects of being launched on a rocket. The completion of the acoustic tests and analysis validated that Webb’s hardware, science instruments, structure and electronics can successfully survive the planned rocket launch in a simulated environment.

Following the completion of acoustic testing, Webb transitioned to a separate chamber where it underwent a series of sine-vibration tests on a shaker table to simulate vertical and horizontal accelerations in lower frequencies. The observatory was rigorously exposed to vibration levels on the shaker that are well above the flight environment, exciting its resonances to demonstrate its capability to withstand the flight environment with significant margins.

The next series of major milestones for Webb will require NASA and Northrop Grumman engineers and technicians to deploy the observatory’s five-layered sunshield followed by wing deployments of its primary mirror in order to fully verify Webb’s flight worthiness. Lastly, Webb will undergo a full systems evaluation before it begins preparations for its historic journey to Kourou, French Guiana for its October 2021 launch.