Designed by Northrop Grumman in Redondo Beach, the Webb telescope’s sunshield will prevent the background heat from the sun from interfering with the telescope’s infrared sensors. The five sunshield membrane layers, designed and manufactured by the NeXolve Corporation in Huntsville, Alabama, are each as thin as a human hair. The layers work together to reduce the temperatures between the hot and cold sides of the observatory by approximately 570 degrees Fahrenheit. Each successive layer of the sunshield, made of kapton, is cooler than the one below. The fifth and final layer was delivered, Sept. 29, 2016, to Northrop Grumman’s Space Park facility in Redondo Beach. 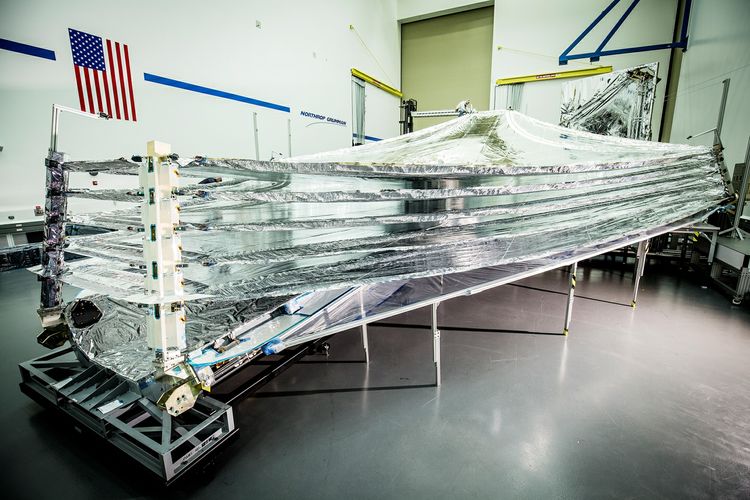 The Webb telescope’s sunshield is currently located at Northrop Grumman’s Space Park facility in Redondo Beach. The sunshield is the size of a tennis court and will make it possible for NASA’s James Webb Space Telescope to image the formation of stars and galaxies created more than 13.5 billion years ago.

“The completed sunshield membranes are the culmination of years of collaborative effort by the NeXolve, Northrop Grumman and NASA team," said James Cooper, Webb telescope Sunshield manager at NASA Goddard Space Flight Center in Greenbelt, Maryland. "All five layers are beautifully executed and exceed their requirements. This is another big milestone for the Webb telescope project.”

Northrop Grumman, who also designed the Webb telescope’s optics and spacecraft bus for NASA Goddard will integrate the final flight layers into the sunshield subsystem to conduct folding and deployment testing as part of the final system validation process.

“The groundbreaking sunshield design will assist in providing the imaging of the formation of stars and galaxies more than 13.5 billion years ago,” said Jim Flynn, Webb sunshield manager, Northrop Grumman Aerospace Systems. “The delivery of this final flight sunshield membrane is a significant milestone as we prepare for 2018 launch.”

The sunshield is the size of a tennis court, helping solidify the Webb telescope as the largest ever built for space. The sunshield, along with the rest of the spacecraft, will fold origami-style into an Ariane 5 rocket.

The Webb telescope is the world’s next-generation space observatory and successor to the Hubble Space Telescope. The most powerful space telescope ever built, the Webb telescope will observe distant objects in the universe, provide images of the first galaxies formed and see unexplored planets around distant stars. The Webb Telescope is a joint project of NASA, the European Space Agency and the Canadian Space Agency.