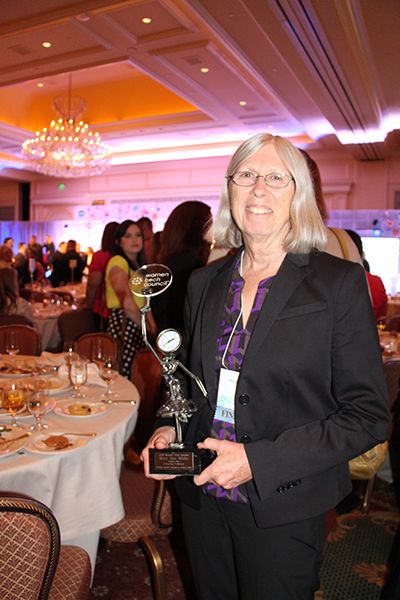 The 16 finalists of the Women Tech Awards are CEOs, founders, managers and engineers from companies such as Adobe, Orbital ATK, Domo and eBay. The ceremony also honored a current student making strides in the industry as part of the 2015 Student Development Award, selected from three finalists from Utah Valley University, University of Utah and Brigham Young University.

“I am honored to have been recognized by the Utah Women Tech Council with the Technology Trailblazer Award,” White said. “I appreciate their efforts to support and promote technical excellence for Utah women.”

White thanked those who have supported her career, including the Orbital ATK team she credited with providing her challenging opportuni­ties that have made her a better engineer.

“We are fortunate to have such brilliant, talented women like Mary Ann and Kathy here at Orbital ATK.” said Scott Lehr, Flight Systems Group president. “The work they do is not only integral to our business but also critically important to inspire young, bright minds into challenging and exciting STEM careers.”

Kathy began her career as a paralegal where she was elected president of the Utah chapter of the legal assistants association. Her legal work in support of medical and engineering issues piqued an interest in technical disciplines. Kathy pursued that passion and earned a B.S. in Mechanical Engineering while working full time.

Kathy joined Orbital ATK in 2007 as a Mission Assurance specialist assigned to the live propellant Mix and Cast operations center. Kathy quickly established herself as a top technical contributor and innovation leader, earning several industry and NASA awards. During this time period Kathy earned her M.S. in Mechanical Engineering and graduate certificate in Systems Engineering.

Orbital ATK selected Kathy to pioneer the Value Stream Engineering Team responsible for rocket motor case insulation. The VSET is accountable to deliver a product meeting all requirements via seamless integration and concurrent engineering. Kathy’s energy, expertise, and technical leadership were key to defining and maturing this approach and capturing effective standard processes shared across the business.

Kathy currently manages Materials & Process. Tasked with redefining this capability in the company, she has been aggressively defining waste reduction processes, negotiating commonality wins across varied programs, developing top notch engineers, and successfully implementing game changing improvements. With a reputation for integrity in her work, Kathy was recently recruited to chair the Orbital ATK ethics committee.

Mary Ann White was drawn to a career in chemistry at a young age due to the influence of an outstanding high school chemistry teacher. As a result of this influence, she earned her B.S. in Chemistry from Miami University, graduating with Phi Beta Kappa and Sigma Xi honors. Mary Ann went on to earn her PhD in Chemistry from the California Institute of Technology. While at Caltech, she published technical papers and obtained patents on transition metal organometallic chemistry.

Mary Ann’s career at Orbital ATK started with the then-Hercules Composite Products Division in Magna, Utah, where she developed new matrix resin systems for carbon fiber composites. She eventually joined the Science & Technology department at the ATK Bacchus Works, before joining the ATK Aerospace Structures Division in Clearfield, Utah. In her current role as a Materials and Process Chief Engineer, Mary Ann supports all of the Division’s programs including rocket motor cases, large launch structures and military and commercial aircraft programs, and serves as a mentor to many younger scientists and engineers across Orbital ATK.