On April 10, 1959 at Edwards Air Force Base, Lew Nelson took to the skies for the very first time in a Northrop Grumman built T-38 Talon. Serving critical missions for six decades, the venerable T-38 has consistently performed and has assisted in flight training exercises for 80,000 pilots. And, with various modernizations, the aircraft has maintained low operating costs, is maintenance-friendly and has a great safety record. 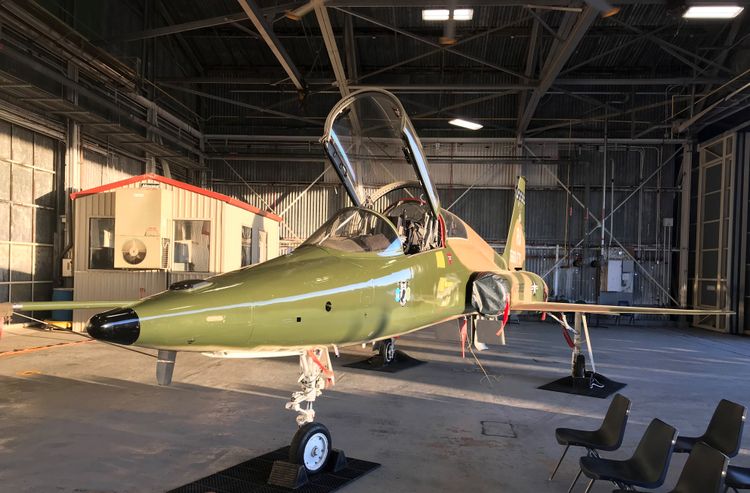 One of the safest supersonic airplanes ever built, the twin-engine, high-altitude, jet trainer can fly at a maximum speed of 858 mph and can climb from sea-level to 33,600 feet in 60 seconds. Out of the 1187 aircraft produced between 1959 and 1972, half are still in use today.

The T38 have been used for over half a century, mainly by the U.S. Air Force, for specialized undergraduate pilot training. In addition, Air Combat Command uses the jet as companion training for their B-2, TR-1 and F-22 pilots. The U.S. Navy and NASA also use the T-38 for flight test and research missions.

Earlier this month, Northrop Grumman celebrated the 60th anniversary of the T-38 Talon’s first flight with the U.S. Air Force at an event hosted by Air Education and Training Command at Randolph Air Force Base, Texas.

Major General Patrick Doherty 19th Air Force Commander stated, “This aircraft [here] will always be remembered in our Air Force and in our nation as being one of excellence that has produced the number one Air Force in the world.”

John Parker, vice president and general manager, global logistics and modernization, Northrop Grumman attended the event and discussed the contributions of the T-38 program to the aviation industry.

“Northrop Grumman is proud to be a member of the T-38 sustainment community,” said Parker. “Over the past several decades, the sustainment community has conducted numerous engineering and logistics analyses, combatted parts obsolescence and ensured that spare parts were available to maintain flight operations. Two weeks ago, the U.S. Air Force Life Cycle Management Center awarded Northrop Grumman a $22 million contract for T-38 and F-5 for the system’s sustainment and engineering. We look forward to continuing the system modernization and upgrades for this agile aircraft so it stays mission ready for years to come.”

To view a video from the event, click here.