Space radiation scorches circuits, eats electronics and tortures terabytes. It is the single greatest threat to systems that operate in or travel through space. But does a rocket that will operate in a radiation-filled environment for no more than 12 hours really need the same expensive radiation hardened flight computer as a satellite that will operate in geosynchronous orbit for 15 years? Northrop Grumman engineers designing the OmegATM rocket decided to find out. 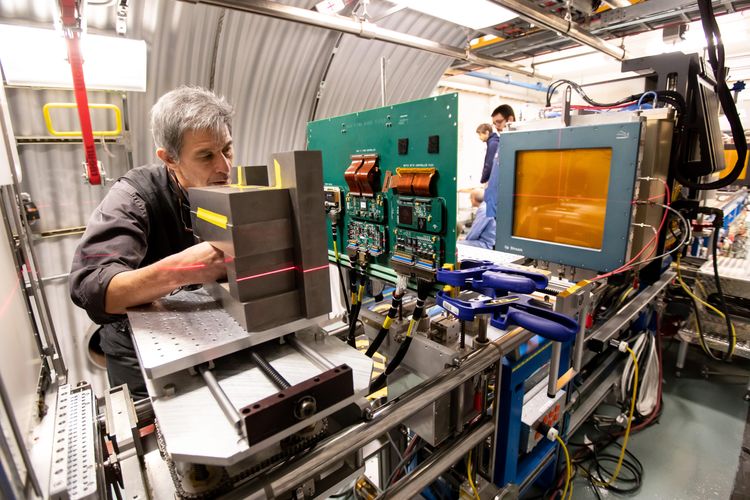 In January, Kirk Bingeman, OmegA electrical senior advisor, shivered in the freezing temperature as he carried boxes and pulled carts full of electronic components and testing equipment inside the NASA Space Radiation Lab at Brookhaven National Laboratory in New York. He usually works at Northrop Grumman’s facilities in Chandler, Arizona, where the winter air rarely dips below 60 degrees Fahrenheit. Here at Brookhaven, with seven colleagues—a combination of electrical engineering and radiation experts—he would spend the next week testing the radiation compatibility of inexpensive, readily available commercial off-the-shelf (COTS) electronic components and circuits.

“OmegA will place sensitive national security payloads into orbit, and while in geosynchronous orbit it will experience galactic cosmic rays, and solar and trapped energetic protons,” said Bingeman. “Radiation testing is critical to ensure OmegA’s electronic components and circuits are resilient to damage or malfunction caused by radiation.”

Todd Warne, OmegA electrical engineering lead, added, “The main driver for all of the radiation testing on OmegA is to provide a reliable ride for our Air Force customer.”

Radiation testing provides data on how a specific component will react to radiation, and when and how it will fail. Many COTS components are not necessarily built to be radiation resistant, but they can support operation in high-radiation environments for short periods, such as the 12 hours OmegA needs to deliver a payload to orbit.

“By testing COTS components in a wide range of radiation conditions, the OmegA team can determine whether it is appropriate to use a specific component, for example, in the avionics units that control and guide the launch vehicle,” said Bingeman. “Testing non-radiation hardened components allows us to make the OmegA rocket much more affordable for our customers.”

Based on data from the radiation tests at Loma Linda and Brookhaven, the OmegA team determined it could forego the expensive radiation-hardened computer. “Instead, we are going with a COTS flight computer we’ve already tested and verified will function properly,” said Warne. “This results in a 12:1 cost saving for the program and our customers.”

In addition to using the testing results on OmegA, Northrop Grumman will apply the radiation data to Minotaur, Pegasus®, Antares™ and other programs, as well as future launch vehicles, targets and missiles.

Warne and Bingeman are proud that their work will have a positive lasting impact on the reliability and affordability of Northrop Grumman launch vehicles now and in the future. “It’s a good mechanism to help ensure overall mission success,” said Warne. “That’s what’s most important to us, and to national security.”

The Heartbeat of Innovation