Taking Cygnus to the Next Level

Innovation Systems • Orbital ATK Archive
Share Tweet Share Email Print
While the International Space Station (ISS) is going strong, enabling scientific discoveries in a state of the art orbiting laboratory, NASA is also working on developing pathways to explore beyond low earth orbit to deep-space destinations such as the proving ground of space around the moon, known as cis-lunar space, and Mars. In order to live and work in deep space, astronauts will need additional pressurized habitation capability beyond what the Orion spacecraft currently provides. And Orbital ATK is looking to the Cygnus product line to help fill this need.

So that humans can take that next giant leap, NASA is building on the success of commercial partnerships with the recent Next Space Technologies for Exploration Partnerships (NextSTEP) Broad Agency Announcement. Through this effort, NASA has selected 12 companies to advance concept studies and technology development projects to enable commercial endeavors in space and human exploration in the areas of advanced propulsion, habitation and small satellites.

Building on the success of the Cygnus spacecraft for space station resupply, Orbital ATK is one of seven companies selected for NextSTEP awards for habitation systems. The contract awards have initial performance periods of up to 12 months, at a value of $400,000 to $1 million for study and development efforts, with the potential for follow-on phases to be defined during the initial phase.

“This award allows us to mature plans to develop an Exploration Augmentation Module (EAM) based on the Cygnus product line and a new docking node concept,” said Frank DeMauro, Vice President of Human Spaceflight Systems at Orbital ATK. “Cygnus modules can be added to increase pressurized volume for the crew and outfitted to increase the associated functionality of the EAM.”

The goal of the habitation systems awards is to help define the architecture and subsystems of a modular habitation capability to enable extended missions in deep space.

"Habitation systems and components are necessary equipment to live in space," DeMauro said. "This covers a broad range of topics from Environmental Control and Life Support Systems (ECLSS), to providing sustenance to the astronauts for their duration of their mission, to providing radiation protection to protect the astronauts for long duration missions outside the asteroid belt, and many items in between."

Orbital ATK will study the functionality and enabling technologies used to supplement human space transportation systems such as NASA's Orion spacecraft to initially sustain a crew of four for up to 60 days in cis-lunar space with the ability to scale up to transit habitation capabilities for future Mars missions.

“We will also develop a Concept of Operations that describes how the EAM will develop over time and how i​t will be used to help long-duration human exploration of space and provide a recommended functional baseline for the system architecture,” DeMauro said. “By studying the necessary functionality for the proposed reference missions, we believe that configurations, EAM layouts, and support equipment can be recommended for further review with an emphasis on providing hardware as early as possible."

Orbital ATK will leverage the company’s experience and knowledge of systems integration and combine it with industry leading teammates in pressurized habitation systems (TAS-I) and the innovation of academia (University of Colorado - Boulder) for ECLSS.

“The Cygnus product line is very versatile and I’m excited to see the outcome of our efforts take this spacecraft to the next level,” DeMauro said.

For additional information about NASA's Next Space Technologies for Exploration Partnerships, and to see the full list of awards, visit: http://www.nasa.gov/nextstep. 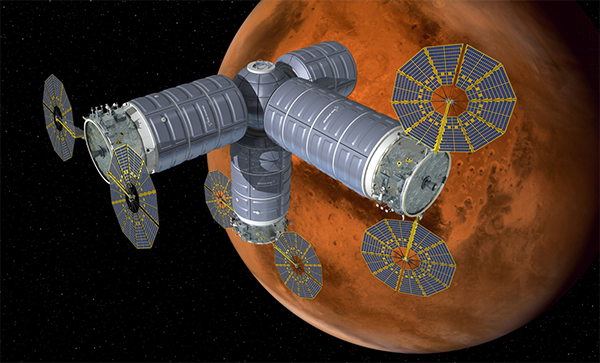