Innovation Systems • Orbital ATK Archive
Share Tweet Share Email Print
Preparations for full-scale tests of Orbital ATK’s solid rocket motors begin months in advance. Technicians set hundreds of sensors in place, verify data collection systems and make sure test equipment is working correctly. Team members are laser-focused on getting everything ready for a flawless test because there is only one chance to get the data needed from a static rocket firing.

The most recent full-scale test of the Orbital ATK-manufactured five-segment boosters for NASA’s heavy-lift Space Launch System (SLS) took place at the company’s facility in Promontory, Utah, on June 28, 2016. The team started the day long before dawn to ensure the countdown went smoothly. Their efforts paid off: the test was successful, providing vital data on the boosters that will provide liftoff and ascent thrust for SLS.

“Ground tests are very important – we strongly believe in testing before flight to ensure we learn all we can on the ground prior to committing to a flight mission in order to maximize its success,” said Charlie Precourt, Vice President and General Manager of Orbital ATK’s Propulsion Systems Division, and four-time space shuttle astronaut. “Now that we have tested our final qualification motor for SLS, it will be very exciting to watch the boosters fire in the vertical position for the first flight!”

NASA’s SLS will launch its first mission with an uncrewed Orion crew capsule, Exploration Mission-1, in 2018. The first crewed launch of the SLS vehicle and Orion spacecraft on Exploration Mission-2 will take humans farther into space than ever before—including possible crewed missions to an asteroid or the vicinity of the Moon, and eventually to Mars.

Watch a replay of the full test here. 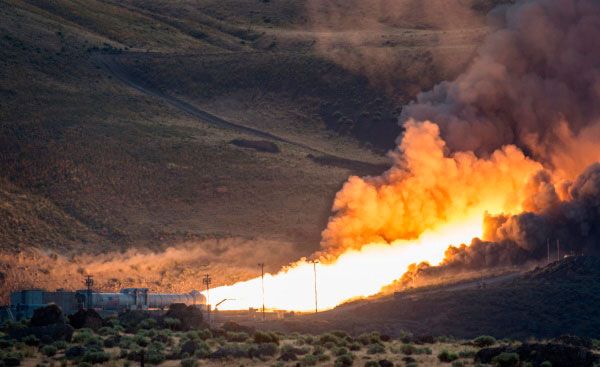