Innovation Systems • Orbital ATK Archive
Share Tweet Share Email Print
Mark Waki hired on at Thiokol in 1982 – in August 2017, he will have worked for the company for 35 years. Since working for Orbital ATK, Mark has become a space program artist of wide renown. His first major project was the "Sting of the Hornet" painting for the HARM program, which he completed in 1985. Since then he has turned out more than 30 major paintings in his work for the company. 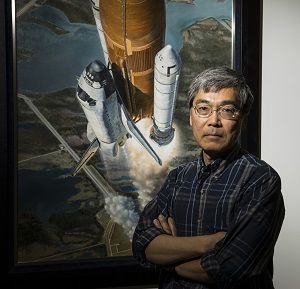 Mark Waki has been with the company for nearly 35 years and has a number of well-known paintings to his credit. T+30, showing the space shuttle 30 seconds into flight, is one of particularly great renown. It is widely thought to be the most reproduced space painting ever.

Mark has had a lot of freedom to do paintings of all of the company's major programs and, early on, the Space Shuttle Program was on his list. In 1985, he started a painting of the space shuttle 30 seconds into flight and completed it in 1987. He named the painting T+30, and this year we celebrate the 30th year of T+30's existence.

Because of T+30, Mark was invited to Kennedy Space Center and Cape Canaveral Air Force Station in Florida and Johnson Space Center in Houston, Texas, and received a tour of each. In 1991 he was presented a Spaceflight Awareness Silver Snoopy Award. Of all the SFA Awards, the Silver Snoopy best symbolizes the intent and spirit of Space Flight Awareness. An astronaut always presents the Silver Snoopy because it is the astronauts' own award for outstanding performance, contributing to flight safety and mission success. Less than one percent of the aerospace program workforce receives it annually. Mark also received a Launch Honoree Award in 2010 for his overall work.

Mark has created several paintings on his own, as well, many before working for Orbital ATK. These include paintings of the F-15, F-16, F-4, and P-51. In 1985 Mark and his brother, also an artist, were commissioned by the USAF Tactical Fighter Weapons Center to paint a 7-foot by 21-foot mural for the Thunderbirds Air Demonstration Squadron. The painting is on permanent display at Nellis Air Force Base in Nevada.

"I initially wanted to be a fighter pilot, but my uncorrected eyesight was too bad. Then I planned to become an engineer," Mark explained, when asked how he came to be in his job. Mark was a whiz at science and math – art was "just" a natural talent. "Because of my interest in aviation and space, I became an artist to be involved with the industry," Mark said. Mark attended the University of Utah, and also attended a trade school for art.

Mark currently has requests for paintings of the F-35 and NASA's Space Launch System, but they are not started yet. "I'm working on models right now, but I'll complete these paintings before the first flight of SLS," Mark said.

Mark has received a number of awards and recognition. Please see his on-line bio for more information: http://markwaki.com/pages/bio.htm.