Preparing for the OmegA Rocket: How to do a Static Test

Tucked into the hillside off a quiet Utah highway, bunker-like buildings go relatively unnoticed among the brush. Deep inside one of these shed-like structures rests the work of dozens of the country’s best rocket scientists. Soon, years of development and dedication will culminate in a ten-second countdown and a smoke plume, but following this qualification test the opportunities are vast. 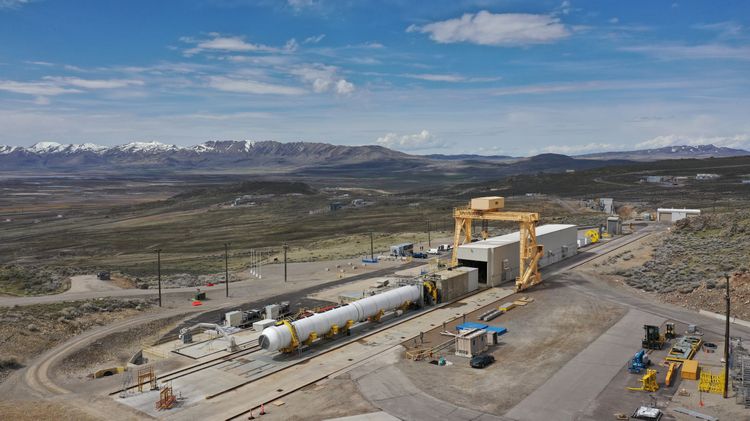 Recently, a team of technicians in Promontory, Utah, artfully manipulated the first stage of Northrop Grumman’s OmegA rocket into its final configuration using multiple cranes and other large tooling. After assembly, the 12-foot-diameter and 80-foot-long stage rests on supports, wiring spilling from its forward end and leading to data collection points carefully located based on precise measurements.

Northrop Grumman is building OmegA to launch intermediate to heavy national security payloads for the U.S. Air Force, as well as science and commercial payloads for other customers. Solid rocket motors with lightweight composite cases power the first and second stages. In a few weeks, the company will perform its first full-scale static test of the first stage, the bottom and most powerful portion of the rocket’s propulsion.

When talking to Scott Lehr, vice president and general manager of Northrop Grumman’s flight systems division, it is immediately clear he is proud of the work going on at Promontory. “This first stage ground test is a major milestone. Three and a half years ago we said we would accomplish this test in the spring of 2019, and that is exactly what we are going to do. In the National Security market, schedule is everything,” he said.

In the remaining days leading up to the static test, currently scheduled for May 30, 2019, technicians will finish attaching instrumentation gauges and data recorders that will measure key characteristics such as thrust, vibration and burn rate. Then they will practice conducting the test, running through and repeating each step of the countdown multiple times. Performing these simulations ensures the team members have all the test systems calibrated and functioning properly.

“Every countdown step is critical and has to be performed with perfection,” says Jamie Barney, director of test and research operations, propulsion systems, Northrop Grumman. “We have an extremely experienced team, but no one here is ever complacent about a rocket test.”

On test day, the entire test bay will roll back to expose the first stage motor attached to three “spacer” segments totaling 177 feet of white casing. When the countdown clock reaches zero, the igniter, housed in the forward segment, will rapidly ignite and pressurize the entire motor.

The motor will continue to burn for approximately two minutes, producing more than two million pounds of thrust channeled through a vectorable nozzle. During the test, 30 to 40 technicians and engineers will line the control room, closely monitoring the sensors, instrumentation, and cameras on and around the motor. They will collect approximately 700 data channels, gauging everything from case growth to component stresses to motor pressure to temperatures – all essential data to qualify this motor for flight.

“The first stage rocket motor is the heart of the OmegA vehicle,” says Paul Messer, OmegA first and second stage motor program manager, Northrop Grumman. “With the critical data from the static fire test, and the post-test inspections, we can qualify our products and ensure their reliability to our customers.”

For about six months after the test, the team will assess the data and disassemble, evaluate and dissect the hardware to observe the effects of motor operation. A post-assessment verdict of reliability across all systems will qualify the motor for flight.

“Successfully completing the full-scale static test later this month will be a significant milestone,” says Kevin Wilder, OmegA deputy program director, Northrop Grumman. “Everyone on the team is personally invested in this program, and we are all looking forward to OmegA’s first launch in 2021.”