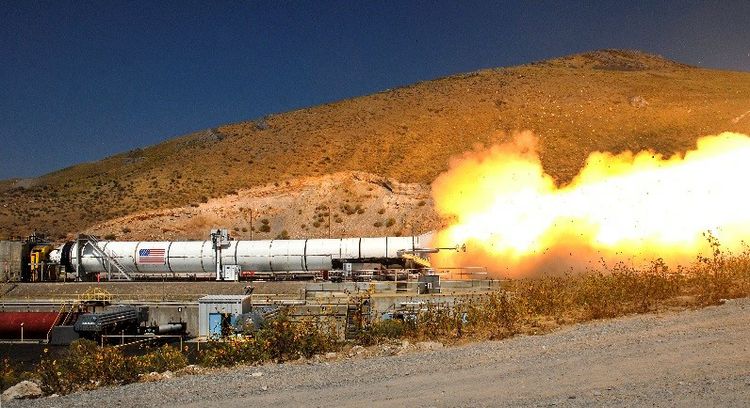 This five-segment solid rocket motor is shown during a “static fire,” or ground test, as part of the qualification process for flight.

Slated for its first test launch in 2020, NASA’s new heavy-lift rocket, the Space Launch System (SLS), should be a magnificent event. At 321 feet, SLS (with the Orion crew module attached) will stand taller than the Statue of Liberty and will produce horsepower equivalent to 160,000 Corvette engines, or 31 Boeing 747 jets during lift-off.

SLS will use two five-segment solid rocket boosters at lift-off to give it the thrust it needs to escape Earth’s gravity and reach the speed necessary to power the rocket into space. These Northrop Grumman-manufactured boosters include the largest solid rocket motors ever made for flight as part of a human spaceflight program, and are 25 percent larger than those used during the space shuttle era. 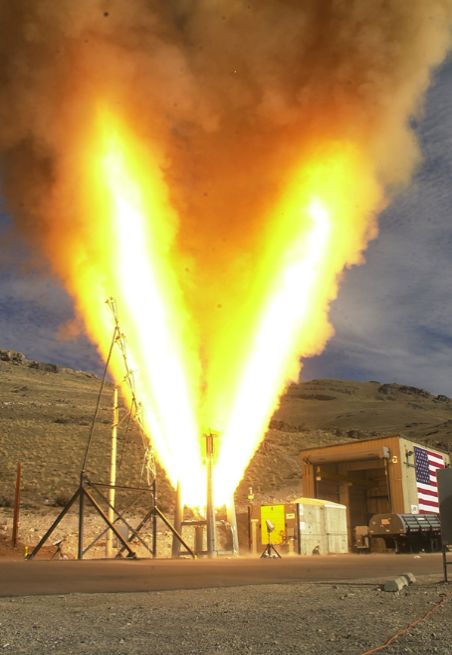 The launch abort motor that is manufactured by Northrop Grumman for NASA’s Orion spacecraft’s Launch Abort System, is shown here during a test that demonstrated the 400,000 pounds of thrust it provides in one eighth of a second to propel the crew module away from the launch pad if necessary.

In addition to the boosters used to aid SLS in lift-off, Northrop Grumman also produces smaller solid rocket motors to be used on Orion’s Launch Abort System (LAS). “Solids are really the ideal choice in the first stages of a launch system,” said Kent Rominger, vice president of strategic programs, propulsion systems, Northrop Grumman Innovation Systems and five-time shuttle astronaut. “Because of the amount of energy you can pack into it, you can get a lot of thrust out of a relatively small rocket motor compared to a liquid system.”

The Launch Abort System’s purpose is to propel the astronauts as far away from the rocket as possible should any problems occur that could put the crew in danger – much like an ejection seat in a fighter jet. The LAS is designed to transport the crew one mile above and one mile away from the rocket in a matter of four seconds. In order to travel two miles in four seconds, you need a lot of power.

“Orion has conducted successful tests with the launch abort motor,” Rominger said. “That system was designed to get the capsule away from an explosion, and designed to keep the crew away from the debris field – it does that. Liquid systems that have been demonstrated to date don’t quite do that. If you want the best protection to get the crew away from the stack, the solids have proven to ignite faster and work the best.”

Rominger said the old Apollo rockets had a very simple launch abort system, and the survival estimates were somewhere around 50 percent. “We’re working hard to make sure we are at 100 percent, no matter what.”

Still, Rominger is the first to admit that in order to have a successful flight, both liquid and solid propulsion are needed.

“You really need both, because at different stages in flight you need different propulsion systems,” he said. “Rather than competing against each other they complement one another. They each have their strengths and work together for a successful space flight. But for a launch abort system, solids are the way to best ensure crew safety.”

SLS, LAS and other commercial motors are not the only applications where solid propulsion methods make the most sense. Because of their long shelf-life, solid rocket motors are used for defense missiles. They can be stored for many years with little maintenance costs, yet be ready for use at a minute’s notice – like the well-known Minuteman III.

The Minuteman III is a missile that is stored in multiple locations across the United States. In the event of a hostile attack, these missiles can be deployed to a target location. 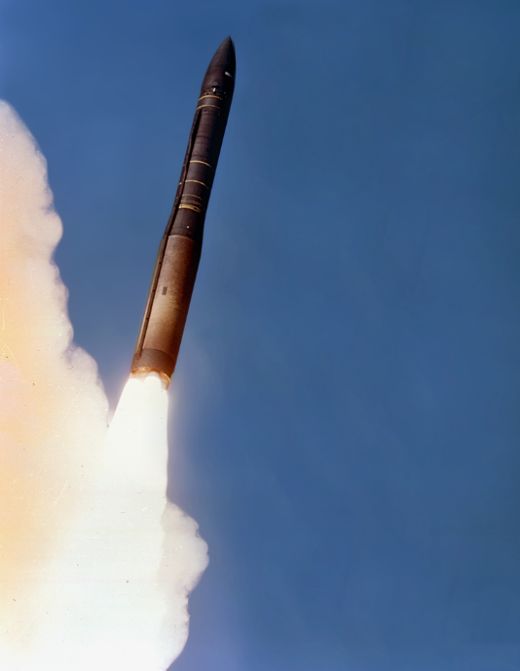 “Solid propulsion systems, like those used in the Minuteman III missile, give you great launch availability,” said Katie Qian, senior manager, business development, Northrop Grumman. “Once they are manufactured they can be stored for a very long time. It also doesn’t take much time to get it ready to launch. In a defense application, when you need things ready to go at any minute, solids are your absolute best choice.”

“They are very safe, very reliable, and they last a long time,” said Rominger. “We have older missiles that are going into submarines, and they are as safe and as reliable as they were on day one.”

Solids, strictly because of the way they are built, are the choice for fast ignition, heavy-lift propulsion that will deliver repeatable results. The ability to store the motors for extended periods of time with no quality loss makes them the ideal choice for the wide (and growing) spectrum of propulsion needs. Learn more about Northrop Grumman’s propulsion systems here.