A large crowd comprised of media, industry, space enthusiasts and the general public gathered on March 11 at Orbital ATK’s test facility in Promontory, Utah, to witness the first qualification ground test of the five-segment rocket motor that will be used for NASA’s heavy-lift Space Launch System. The successful pre-flight test, known as Qualification Motor 1 (QM-1), fired on schedule in a flawless display of smoke and fire against the early morning sky.

Initial data from the test indicate the motor performed as designed and delivered the anticipated performance. The rocket motor produced approximately 3.6 million pounds of thrust, or 22 million horsepower, and burned for just over two minutes. More data will be available as post-test analysis is accomplished on the 102 design objectives that are supported by 531 instrumentation channels.

“This motor firing is the first of two qualification tests to certify the motor configuration for NASA’s Space Launch System,” said Charlie Precourt, Vice President and General Manager, Orbital ATK’s Propulsion Systems Division. “This was a very clean test this morning and I am very proud of the team and all of their hard work that went in to making this milestone a successful event for everyone involved.”

Measuring 12 feet in diameter and 154 feet in length, Orbital ATK’s five-segment motor is the largest human-rated solid rocket motor built today. When it is fully assembled as a booster, it will be 177 feet tall (approximately 17 stories). It produces 20 percent more power than the previously-used four-segment motor, and it also uses new materials that provide cost and weight savings. The five-segment motor was designed to maximize safety while providing an affordable and reliable launch capability for human missions deeper in the solar system than we have ever gone before – including to the surface of Mars.

“This is an exciting time for exploration, as we venture farther into space,” said Precourt. “The promise of deep space exploration will inspire the next generation to pursue careers in science, technology, engineering and math – preparing them to run the missions we’re designing.”

Today’s qualification test included newly-designed avionics hardware and equipment to control the motor and provide improved test monitoring capability. Other test improvements include a new main pivot flexure design in the forward thrust block to transfer the massive forces from the test into the various load cells for thrust monitoring, as well as an added mid-span support that assisted in adjusting the motor centerline to make the test more consistent with actual flight conditions.

NASA’s SLS will launch on its first mission, Exploration Mission-1, in just a few years. The next major static fire test for the rocket booster, called QM-2, will occur at the Promontory facility in the spring of 2016. This test will be a cold test, where the booster will be conditioned to 40 degrees -- the low-end temperature parameter for the booster. 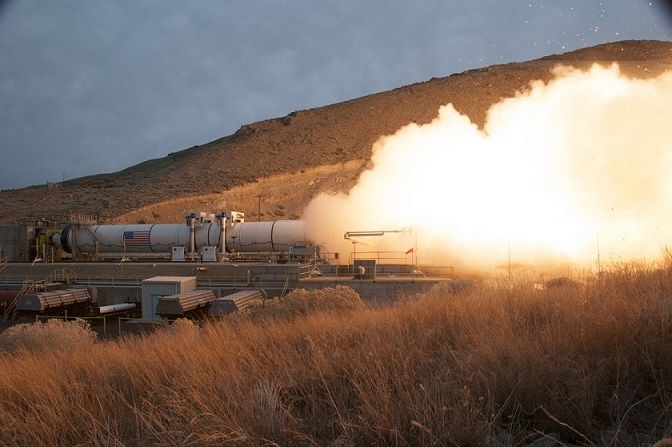